Cars, taxes and the new Congress

Watching folks parse election results is almost as much fun (or pain, depending on how your candidates did) as watching the voting tallies come in on those fateful Tuesday nights.

Every sector has a take on what the political change in the House of Representatives might mean to it.

Today, I ran across an automotive industry perspective in the post-election edition of Autoline Detroit. Nolan Finley of The Detroit News and Edward Lapham of Automotive News joined host John McElroy to discuss Politics as Unusual, or how the midterm election affects the folks who make the cars we drive. 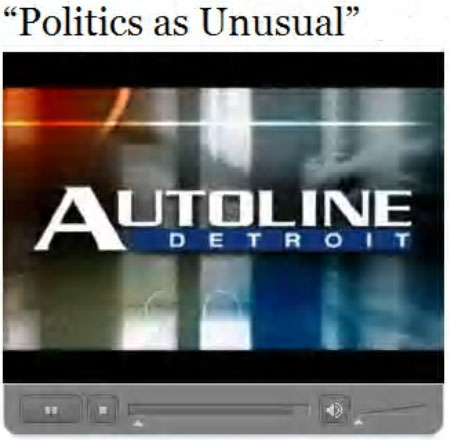 There are trade, labor, energy, environmental and tax issues that come into play when you look at the auto industry. I'll let you hear all about them at your leisure. But for this post, guess which topic I'm going to focus on?

Taxes and our vehicles: The bottom line from the program's participants is that the auto industry probably gained some clout in this last election.

Several Michigan Representatives are slated to take leadership roles in key House committees. And the GOP majority there should limit or stop legislative attempts that automakers find problematic.

However, the Autoline Detroit experts expect the Obama Administration to continue to try to change auto industry operations via regulations.

From a tax geek point of view, I was delighted that the trio discussed tax incentives for more fuel efficient cars. These laws not only affect auto manufacturers, but us taxpayers who buy the vehicles.

Tax credits for hybrid vehicles will end on Dec. 31. Earlier this year, there was an indication that this tax break might be extended. That's not likely now, given both the new political landscape and the focus on the federal deficit.

Incentives remain for electric and other alternative fuel vehicles, but the Autoline Detroit program participants agreed that there's no real marketplace for these vehicles now. In fact, government mandates of higher mileage rates and alternative vehicles could drive people away from these vehicles.

The car guys have a point.

The big problem, for car makers and car buyers, is the bigger prices for most ultra-fuel-efficient vehicles. Sure, when you compute the gas savings over the life of the vehicle, you're likely to get back those extra dollars you paid when you bought the efficient but expensive car.

But for most of us, those up-front costs are paramount. The only time that changes is when something else affects our pocketbooks even more.

Remember when gasoline topped $3 a gallon a few years ago? Dealers couldn't keep Priuses and similar fuel-efficient vehciles on the lots. But as soon as pump prices dropped a bit, American drivers resumed their traditional driving, and car buying, habits.

Congress toyed with making fuel tax changes during the 2008 presidential campaign, but that idea went no further than campaign soundbites. And most of those ideas actually focused on a summertime gas tax holiday.

So unless this new Congress is willing to bump up the fuel excise tax enough to force folks into at least considering more fuel-efficient cars, such vehicles will continue to simply be a niche within the overall auto market.

I must admit that I'm a bit concerned about how this might affect the legislative process.

I don't know about you, but the haggling when it comes to buying a vehicle is one of the main reasons that I drive my cars until they simply won't go anymore. I want to put off that negotiating process as long as possible!

I certainly hope these six car dealers don't slow down things on Capitol Hill too much more!

A reminder about race cars: I haven't mentioned one of my writing sidelines in a while, but this post seems like a good fit so here goes.

My latest motorsports column, Crazy Woman Driver and Views From The Grandstands (depending on which publication you read), is available at truck stop newsstands nationwide, as well as digitally. This month, I talk about the things in the racing world for which I'm thankful.

If you're not on the road, you can check out my racing Thanksgiving thoughts in the online versions of Truckers News or Changing Lanes.

And you can find links to all my racing columns in my Crazy Woman Driver takes a Sunday Drive post.