I spent part of last week at my alma mater, Texas Tech University. I always enjoy going back to the campus; it's a lovely place.

I particularly like meeting today's students. Times have changed since I was an undergrad (and no, I'm not telling you how many years ago that was, but thanks for asking), meaning there are lots of different pressures on kids today.

But despite the challenges facing them, I'm always energized by the students' enthusiasm, their insights and observations and their willingness to talk with us more experienced (yeah, "experienced," that's the description I'm going to use!) alums.

So when I finally started slogging through my backlog of e-mail, newsletters and general reading, the material about educational tax breaks immediately caught my eye.

Hoping to make more of American Opportunity: Last Wednesday as I was travelling to Lubbock, Obama was holding a mini-rally at the White House, complete with some college kids and their families, to encourage Congress to make the American Opportunity tax credit permanent. 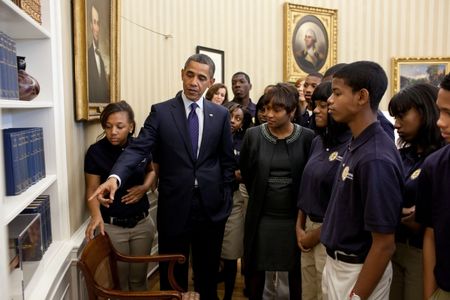 President Barack Obama shows students from Johnson College Prep in Chicago, Ill., and their principal, Dr. Garland Thomas, a model of Samuel Morse's telegraph patent in the Oval Office, during their visit to the White House. (Official White House Photo by Pete Souza)

"I am calling on Congress to make this tax credit permanent so it's worth up to $10,000 for four years of college," Obama said during the White House Rose Garden event.

The cost to do that, according to the prez's budget, would be $58 billion over 10 years.

Current credit breaks: The American Opportunity tax credit, like the Making Work Pay credit, was part of the 2009 stimulus bill. And again like the payroll tax reduction measure, the educational tax credit will expire on Dec. 31.

American Opportunity essentially expanded and replaced the Hope Scholarship tax credit for the 2009 and 2010 tax years.

Where the Hope provided a tax credit of $1,800 per student, the American Opportunity credit offers a maximum benefit of $2,500 per student. Costs that qualify for the credit include tuition, fees and course materials, even computers. The Hope's smaller credit amount didn't cover course materials.

As for when those expenses are incurred, the American Opportunity Credit can be claimed for expenses for four years of undergraduate work. The Hope credit was only good for two years of study.

More students also are eligible for the American Opportunity credit because the eligible income levels were expanded; those with a modified adjusted gross income, or MAGI, of $80,000 or less, or $160,000 for joint filers, qualify. For those making more -- up to $90,000 MAGI for individuals and $180,000 for joint filers -- some of the credit is still available based on a phased-out basis.

And best of all, a portion of the credit is refundable, meaning you could get money back from the IRS even if you don't have any tax liability.

Treasury found that education tax incentive claims, both deductions and credits, cost $18.2 billion in 2009, the first year the American Opportunity tax credit was in effect. That's up from $8.7 billion in 2008.

Other high points in the report include:

A closer look at the data reveals that the biggest beneficiaries were low-income families who took advantage of the refund option and upper-middle class families who previously couldn't claim the Hope or Lifetime Learning credits because they earned too much.

Expect to see more of the report data doled out when Congress returns and gets more pressure from the Administration to keep stimulus tax breaks in place beyond the end of the year.