The hubby and I are pretty happy with our investments, most of which are in mutual funds.

We don't fixate on them, although I have been known to stomp around the house when the market takes a dip. But we do try to stay on top of what's going on in the financial world in general and how that specifically affects our holdings. We do, after all, want to retire sooner rather than later.

So that's why we spent some time yesterday reading the New York Times special section on mutual funds.

Yes, we got our fingers dirty scanning the 10 pages of agate searching for our holdings' quarterly (July 1 through Sept. 30) particulars. 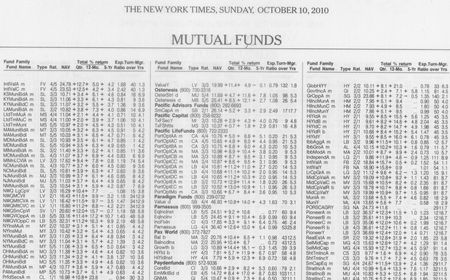 We also gave our eyes a break and checked out the stories.

The one that was of special interest to me was, of course, the article that proclaimed Funds' Tax Bills Are Looking Light.

Mutual fund passed-along taxes: Mutual funds are easier investments for many reasons, not the least of which is that someone else makes the individual moves within a fund to, ideally, maximize its overall earnings.

Those moves include selling assets when appropriate. And that means that fund managers then pass along any capital gains realized from the sales. Essentially, each shareholder has to pay his or her part of the gains realized when the fund sold some stocks that had appreciated.

Such sales within the mutual fund sometimes mean that even when a fund's overall value is lower at year's end than it was on Jan. 1, a fund holder can be hit with a tax bill.

I blogged about such a surprising tax predicament about this time of the year in 2008 in Coping with the tax cost of mutual funds. Yesterday's NYT article noted that such an unwelcome tax cost on less than stellar performing funds also appeared in 2000.

"This year, the tax burden on mutual fund investors will be relatively light, because many fund managers still have substantial tax losses on their books from previous years that they can use to offset any capital gains accumulated in 2010."

That was the weird move on May 6 when the market inexplicably dropped like a rock. A "huge, anomalous, unexplained surge in selling, it looks like in Chicago," about 2:45 p.m. that day, apparently set off trading based on computer algorithms, which in turn rippled across indexes and spiraled out of control.

Following that event, the Securities and Exchange Commission enacted new rules to automatically stop trading on any stock in the S&P 500 whose price changes by more than 10 percent in any five-minute period.

As soon as they caught their breath that day, those who saw their holdings affected by the flash crash became worried about the event's potential tax implications.

While some investors on that day in May took big losses when the market dove, Robert W. Woods, Forbes' The Tax Lawyer blogger, says that some investors sold stock at a gain because of stop-loss orders triggered by the "whopping and sudden decline in stock prices."

In the wake of that day's market chaos, investors and brokers asked the IRS for help. They want, says Wood, that:

Sorry. No such luck.

While the tax agency understands the investors' concerns, in Information Letter 2010-0188, the IRS says it doesn't have the power to allow the tax relief the investors want.

So don't be surprised to see the flash crash tax issues show up as add-ons to one of the many pieces of tax legislation (expiring Bush tax cuts, extenders, etc.) that Congress swears it will consider when it returns for a lame-duck session after the Nov. 2 election.

But whether such a provision -- or any tax legislation -- will actually pass is anybody's guess right now.