The hubby and I finally watched the Mad Men season finale that we had taped while we were traveling. A few thoughts from the show.

First, Betty is a bitch. She's not just a terrible mother, she's a terrible person. If she doesn't appear in any episodes next season, that's just fine with me (and Sally!).

Second, Don, Don, Don. Sure, Megan is gorgeous, has a brain and is great with your kids, especially compared to your ex (see the first point above). And yes, you've been remarkably successful in creating a "new" you all these years. 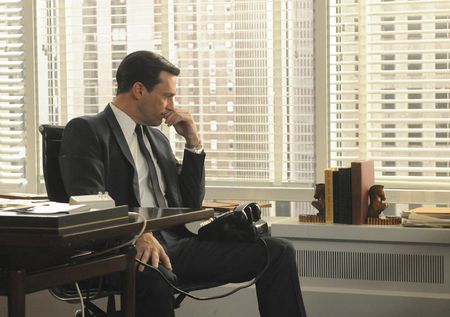 But Don, Dr. Faye was right. Eventually you must be a person like the rest of us.

Third, what the heck are you thinking Joanie? You need to sever all ties with Roger and that abusive loser husband of yours. Instead, you've made the disastrous decision to keep both men in your life for a long time.

Fourth, Peggy is fantastic. So is Elisabeth Moss. Despite the cult of Don, of which I'm a member, this fourth season belonged to Ms. Moss and her portrayal of the former secretary who's become the ad agency's best copywriter, not to mention Don's conscience.

Don Draper's taxes: Fifth, Don (or rather the scriptwriters) appear to have overstated his potential capital gains tax rate in 1965. (Thanks for hanging in there. You knew I'd get to the tax headline eventually!)

In discussing the sale of his former residence in Ossining, N.Y., Don asked his financial adviser, "So Mary Sunshine, what's the capital gains? 48 percent?"

You know that even with all the other juicy stuff going on in the show, that brief scene -- which ended with a heated phone call between Don and his bitchy ex-wife; no, I can't let go of my dislike for Betty! -- stuck in my tax brain.

The Urban Institute says that beginning in 1942, taxpayers could exclude 50 percent of capital gains on assets held at least six months or elect a 25 percent alternative tax rate if their ordinary tax rate exceeded 50 percent.

A UPI story in the May 29, 1963, edition of the Lodi (Calif.) News Sentinel reports that the House Ways and Means Committee voted to "slash income taxes on profits made from sale of stocks, bonds, houses or other real estate."

The lower tax rate -- a minimum of 22 or 40 percent, depending on the taxpayer's ordinary income tax bracket -- would take effect on Jan. 1, 1964, for assets held for at least three years.

But, adds the 1963 news story, "the actual savings would be larger than that for most taxpayers because levies on the capital gains would be reduced still further by cuts in income tax rates which the committee plans to approve later."

That newspaper report is confirmed by the Tax Policy Center, which notes that capital gains have been taxed at lower rates than ordinary income for most of the history of the income tax and the Revenue Act of 1964 significantly lowered all tax rates on ordinary income. The top rate, which applied to joint filers earning at least $200,000, was cut from 90 to 70 percent.

So if Don's ordinary income tax rate in 1965 had been cut by the prior year's tax legislation and he got additional capital gains tax relief since he had owned the New York home for more than three years, he probably was overstating his capital gains tax liability.

But such tax bill exaggeration is not that unusual, as any tax or finanical adviser who's dealt with frantic and angry clients will tell you.

As you can see from the excerpted table below (click to enlarge), we're enjoying some historically low tax rates on investment income. 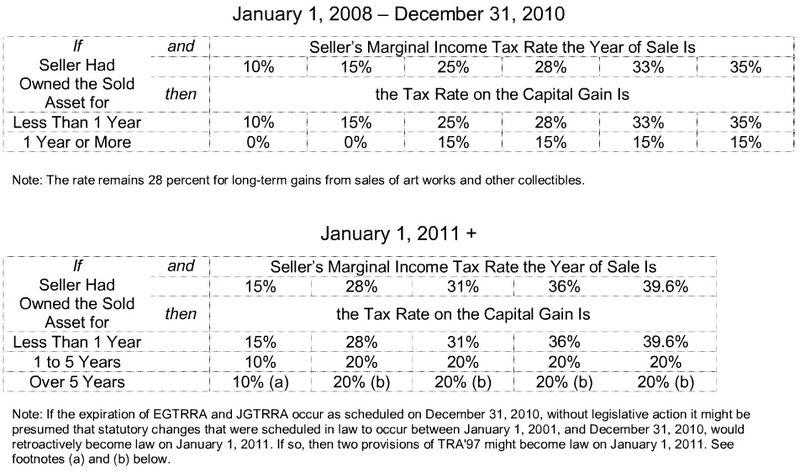 What happens at the polls in a couple of weeks could go a long way in determining whether the Bush-era tax cuts, including those for capital gains, stay or go.

RDF, thanks for the insight. And you reminded me of one of my favorite Hollywood tax liberties -- the estate tax issue in The Shawshank Redemption.

As for your potential pilot, timing is everything. This might be the time!
Kay

Over the years I have rarely, if ever, seen a true reference to actual existing tax law in any movie, play or television program.

Movies and tv show always have "consultants" to assure at least minimal accuracy in other areas represented in the production - so why not a tax pro on set to get these things right?

As an aside - many years ago my mentor suggested that a sitcom might be based on our storefront tax preparation office - but changed his mind because, as he said, nobody would believe it was true.