I'm not a math whiz.

That's probably not something that someone whose life is taxes should admit, since taxes are all about the numbers. To that I say, thank God for calculators, tax and otherwise!

But I don't need extra math help to add up this equation:

When the economy stinks, folks lose jobs or take any job regardless of how low the pay, and that means Uncle Sam's tax collections are lower.

If you want the actual figures, though, the Tax Foundation has them in its latest analysis of federal individual income tax data.

2008, the year of the IRS info studied (and the most complete yearly tax data to date), was, notes the Tax Foundation, "a year of economic recession in which the world's financial system was temporarily in a perilous state."

2008 also was a year in which the amount of individual income taxes paid fell by $84 billion.

Lower tax rate, less tax money: Contributing to the lower amount of tax money collected is the fact that average income tax rates in the United States that year were at their lowest levels since 2004.

Digging into the numbers a little deeper (thanks, guys!), the Tax Foundation discovered:

Incomes reported by tax returns at the high end of the income spectrum plummeted from 2007 to 2008, as did their share of the nation's income and income taxes paid. In 2008, the top 1 percent of tax returns paid 38.0 percent of all federal individual income taxes and earned 20.0 percent of adjusted gross income, compared to 2007 when those figures were 40.4 percent and 22.8 percent, respectively.

Both of those figures — share of income and share of taxes paid — were their lowest since 2004 when the top 1 percent earned 19 percent of adjusted gross income (AGI) and paid 36.9 percent of federal individual income taxes.

Some even paid nothing: Other IRS data, says the Tax Foundation, shows that in 2008 around 52 million tax returns were filed that used exemptions, deductions and tax credits to completely wipe out the taxpayer's federal income tax liability.

In fact, says the study, not only did these individuals get back every dollar that the federal government withheld from their paychecks during 2008, but some even received tax refunds.

The table below provides a summary of the 2008 federal individual income tax data. Click on the image, or here, for a larger view. 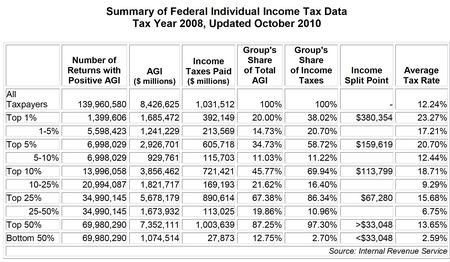 If you're a dedicated math geek, you can check out all the numbers yourself, along with lots of other tables, in the Tax Foundation's Fiscal Fact No. 249, Summary of Latest Federal Individual Income Tax Data (that's a PDF file; if you prefer, you also can see a summary of the data in HTML format).