I'm not saying Coloradoans (Coloradans?) are loony. Heck, my sister- and brother-in-law live there and I really like them. 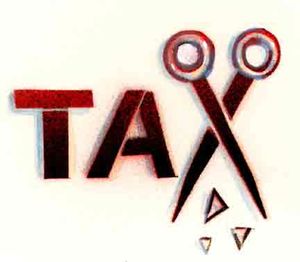 I'm just saying that Centennial State residents are definitely mad, as in enthusiastic, about tax cuts.

OK, maybe they're mad, as in angry, about taxes, too.

Back in February, Colorado Springs got a lot of flack attention for its decision to slash property taxes.

The resulting loss of revenue meant the town also had to make some tough choices about which services would be saved and which would be cut.

Three tax-cutting proposals will be on the state ballot. The links below (PDF files) are to an analysis of each measure provided by the Colorado Legislative Council, an official state website.

Getting what you want to pay for: In my Bankrate Taxes Blog I liken the Colorado tax-cut effort to a return to the state's Wild West days.

Hey, I grew up in West Texas. I love the mythology of the cowboy and the guts and gumption of our independent ancestors who wanted to see both the Atlantic and Pacific Oceans.

But it's 2010, folks. Despite political propaganda that we can have it all, low or no taxes and all the services we want, that's just not true.

And sometimes, as the famous quote goes, in order for all of us to keep living in a civilized society, we have to pay taxes we don't particularly like.

Who knows, one day that tax you now oppose could benefit you. Life is funny that way.

Colorado tax cut pros and cons: If you're a voter in Colorado, I encourage you to carefully consider both sides of each tax ballot question.

In addition to the state links above, you can check out the three tax-related initiatives, as well as the other ballot questions that Colorado voters will deal with on Nov. 2, at BallotPedia.

Your Colorado Ballot Initiatives Reference is by a blogger who takes a position on each question, but in doing so also lists the pros and cons of Proposition 101, Amendment 60 and Amendment 61. At this site you'll also find links to sites that support and oppose the referenda.

Colorado Back$eatBudgeter is an online tool that lets you decide how the state's budget should be spent. As it says, cut services, raise taxes, you decide.

The New York Times talked with both Democrats and Republicans in Colorado who are concerned about what approval of the ballot measures could mean for their state.

Similar bipartisan tax-slashing worries are expressed in a Stateline.org story.

CoTaxReform.com details why it supports Proposition 101, is for Amendment 60 and wants Colorado voters to approve Amendment 61.

Great Education Colorado offers reasons why that group is against the three tax-related Colorado ballot initiatives.

Of the 130 Coloradoans (53% Men and 47% Women) who responded to a recent poll / survey fielded via targeted email between August 25 to September 18, 2010 concerning upcoming Colorado Ballot Initiatives, it appears that a variety of Colorado’s registered voters are saying “No” to Amendments 60, 61 and Proposition 101 at rates of 72%, 73% and 72% (respectively).
The survey sample included 38% Republicans to 39% Democrats, with 17% Independents and 3% Libertarians, who were varied in their support and opposition. While Republicans tended to modestly oppose the three initiatives at the rate of 51%, 51% and 53%; the Democrats were more surely opposed at 90%, 90% and 92% against Amendments 60, 61 and Proposition 101 (respectively). Independents were less radically opposed at 76% across the board; while Libertarians were 100% for the initiatives.
The survey sample was somewhat representative of the State’s population distribution in that about 62% of responses came from the vote-rich more densely populated Denver and Colorado Springs areas, while about 18% came from Southeast Colorado, and about 20% from the Western Slope and Southwest Colorado. Respondents in Walsenburg were about 10-to-1 against the initiatives; while persons in Huerfano County, living outside of Walsenburg were only 3-to-1 against. On the other hand, in the Denver / Colorado Springs sub-sample, respondents were about 61%, 63% and 66% against Amendments 60, 61 and Proposition 101 (respectively).
One expected finding was that among the 69 respondents who work either for a government or non-profit agency, opposition to the initiatives was 86%, 86% and 88% (respectively); while among the 36 respondents who work either in a for profit business or who are self-employed, opposition to the initiatives was only about 56%, 56% and 53% respectively.
Three factors apparently aligning against Amendments 60, 61 and Proposition 101 are:
 Democrats overwhelmingly oppose these initiatives while a majority of Republicans appear to oppose them also;
 Vote-rich urban areas appear to be consistently opposing these initiatives; and
 Colorado’s heavily represented government and non-profit workforce are solidly opposed to all three initiatives.
Finally, Huerfano County respondents appear set to vote away these initiatives, although this could be more clearly demonstrated in Walsenburg than elsewhere in the County.
It is obvious that some very strong feelings have been tweaked here as nearly half of the sample voluntarily submitted paragraphs upon paragraphs about what they thought about these initiatives. These comments are likely to be helpful to future reports on this subject.
It should be noted that while this survey / poll has its representative value, and is presented as truthful and accurate; generalizing these results to a greater Colorado election is difficult and it is not possible to accurately predict the outcomes of the actual election due to numerous factors beyond our control. Polling about these issues will continue throughout the election. If you would like to participate, please go to: http://www.beverlyresearchlab.blogspot.com/ and tell us what you think.