It started out providing a monthly benefit to those age 65 and older who no longer worked, the amount based on the retiree's payroll tax contributions. The SSA also provided unemployment insurance, aid to dependent children and grants to states for medical care. 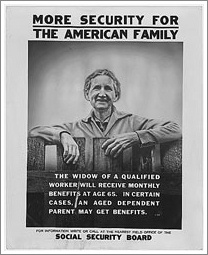 Over the years, changes have been made to the Social Security system. In fact, they started as soon as 1939, with the program shifting to family-based insurance rather than just an individual-based one.

With the 1939 amendment to the SSA, in addition to benefits for retirement, payments were authorized for disability, premature death and medical costs after retirement.

That year, monthly benefits payments also were moved up to 1940 rather than 1942. The first monthly retirement check went to a woman who had paid a total of $22.54 into the system and received $22,000 in benefits over her lifetime.

Tax rates then and now: In 1935, the amount of earnings subject to the Social Security tax was $3,000. The tax rate was 1 percent.

Now the rate is 6.2 percent, paid by both employees and employers on substantially more income. In 2010, up to $106,800 in earnings are subject to Social Security payroll taxes.

Another 1.45 percent in tax, again paid by workers and their companies, is withheld for Medicare. There is no income limit on the earnings subject to this tax.

The two parts of the FICA withholdings comes to a total of 15.3 percent, shared equally by you and your employer.

Concerns about Social Security's future: That amount of payroll taxes, however, isn't enough to sustain the system forever. And that worry has been around for generations now.

In 1975, a Treasury Department report found that Social Security payroll taxes would be insufficient to meet benefit payments by 1979. That prompted Congress to, in part, increase the tax rate and reduce benefits.

Another round of changes came in 1983, following National Commission on Social Security Reform suggestions that led to, in part, partial taxation of benefits to upper income retirees, inclusion of federal civilian and nonprofit organization employees in the system and a bump of the retirement age from 65 to 67. 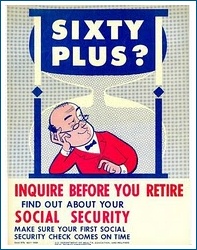 Still, worries about the program continued, producing more system tweaks over the years. And today, the issue has become more political than policy based.

Ultimately, though, action must be taken in light of the aging U.S. population ages and economic concerns of both individuals and the country.

In 2016, the program's cost will exceed expected tax collections. And by 2037, Social Security is projected to run out of income.

Those dire predictions come directly from the Social Security Board of Trustees. You can read the Board's latest report on the system's sustainability for more details.

The bottom line is that money is short and there's not much political or taxpayer will to pump more cash into the system. The greatest likelihood for change, at least in the near term, is once again increasing the retirement age at which retirees can receive full benefits.

That makes it even more critical for everyone to take steps themselves to save for retirement.

In addition to helping build a nest egg, workplace plans such as 401(k)s and traditional and Roth IRAs offer some tax breaks.

You can use the Social Security Administration's retirement estimator to see how big a benefit check you might receive. Remember, the calculator's amount is just an estimate.

But it will let you know how much work you need to do to now so that you'll have the type of retirement you want.

The social security system is no more and no less than a ponzi scheme destined to failure!

To keep it afloat there are now democrats talking about seizing the 401k or IRA retirement accounts and putting those monies into the social security system.

I always wonder why the democrats get away with propogadizing that the GOP would destroy the Social security system when it was the democrats in 1993 with Al Gore's vote as VP that increased the taxability of social security benefits. It was in that same legislation that allows more favorable tax situations for those that are not married.