While some of their colleagues were pondering extension of tax cuts set to expire on Dec. 31, a couple of Senators were trying to rally support for their effort to revive a tax that died last December.

The measure also has a nifty political appeal. It provides lawmakers a chance to make everyone -- OK, all voters, but probably not the Treasury -- happy by giving estates the option of using this year's zero estate tax rate with carryover basis or filing under the proposed law's provisions that reinstate stepped-up basis. (More on basis issues in a minute.)

Estate tax changes: Their estate tax measure, which Lincoln and Kyl want added as an amendment to the small business bill (H.R. 5297) now pending in the Senate, would set the estate tax rate at 35 percent.

It calls for a $5 million exemption amount, phased in over 10 years and indexed for inflation.

Finally, it would also provide for stepped-up basis treatment of inherited assets.And I did mention, didn't I, that all these changes would be permanent. Or as permanent as things can be when it comes to Congress.

In this situation, it would at least mean that there would be no immediate fear of the law running out in the middle of tax planning by families and their financial advisers.

Planning positives: That component was specifically addressed in the joint press release issued by the Senators. 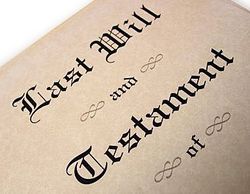 "Uncertainty in the estate tax law has caused incredible difficulties," said Lincoln. "One way to improve upon an already strong legislative initiative that includes tax incentives and a number of other benefits for small businesses is to ensure that we reach a permanent solution on the estate tax to provide small business owners and farmers with the certainty they need."

"It is estimated that more than a half million American families will pay the estate tax over the next decade, and the lack of congressional action creates a tremendous amount of uncertainty for these families, small-business owners, and farmers," said the Arizona Republican. "This uncertainty is one of several factors acting to prevent a strong economic recovery from taking hold."

Basis considerations: If the Lincoln-Kyl measure is enacted, estate managers will have to run some extra calculations.

Under the current law, which still could be used, an estate wouldn't owe any taxes regardless of its size. That seems like the perfect scenario to handle the gigantic estates left, for example, by Texas oil-industry magnate Dan Duncan and New York Yankees owner George Steinbrenner who died this year.

But for heirs who might want to sell assets they received there's the issue of capital gains. And that's where basis and its treatment by the estate tax are crucial.

You need to know the item's basis so when you go to sell sell something you were bequeathed, you can figure out the tax bite.

Basically, you subtract the property's basis from the sales price to come up with the taxable profit. Now, however, thanks to the expiration of the prior estate tax law, that's a bit more confusing.

Before this year, when you inherited an asset, you also received the property's stepped up basis. That's its value of that asset at the time of the previous owner's death.

Again, that's a very simplified example and there are special rules in place.

When Congress realized they had created this basis problem by letting the estate tax die, they got the IRS to issue rules allowing for $1.3 million dollars worth of a stepped-up basis for each taxpayer and $3 million for surviving spouses.

But the allocation of this basis must be decided by executors, making that job even more unwanted than before!

The bottom line is that Lincoln and Kyl are right. The estate tax in its previous incarnation was complicated as hell. Now that it's gone, things for many families have gotten even more convoluted.

Will this proposal clear them up? Not in every case. We are talking taxes!

And I'm sure that the fact the Senators want to let estates choose which taxation method will apply to them is causing massive annoyance at the IRS, which will have to sort through the eventual filing choices.

No law change, more taxes due: But most taxpayers agree that the proposed exemption amount and tax rates are better that what's on the horizon.

Without any change, on Jan. 1, 2011, the estate tax will be back on the books with an exemption of estates worth up to $1 million; assets in excess of that will face a 55 percent tax rate.

Also keep in mind that while Lincoln and Kyl might have a bit of an advantage because they've been working on this for a while, there's another estate tax proposal out there that might come into play when the Senate finally gets around to debate.

Plus, there's the ever-vexing issue of paying for any estate tax changes.

As I've said many times this Congressional session, stay tuned. And yes, I am seriously considering having that phrase discreetly tattooed somewhere.

Great point, Elizabeth! Am using that to try to convince hubby of my need for ink!

If you add your website to that tattoo you could be looking at a potential business deduction! ;)