Tips are part of the restaurant business. But your favorite eatery is not the only place where satisfied customers hand over a few extra dollars for good service. 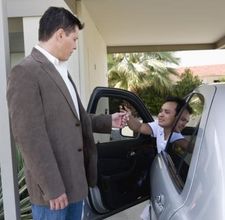 Tips, and their tax ramifications, are common in several industries. Aside from tipping the taxi driver when he drops you off at the hair salon, you do give your stylist a gratuity for that nice cut, don't you?

The big problem for the IRS is that aside from the clergy, most people who get tips probably don't report all of that income on their tax returns.

Not a good idea.

During a session on tips and taxes at the cconference this week, many of the preparers reported an increase in IRS audits of their clients who work in industries where tips are common.

Tips other than cash: Complicating things further is that some folks get noncash tips. Tickets or passes to sporting events or concerts are typical, but folks can get creative.

One NATP member told of a client who is an exotic dancer and who received a new car as a tip from a customer. Don't worry; client privacy was protected despite some good-natured, and unsuccessful, prodding for dance and automotive details.

Even some tax preparers get tips.

One told of the client who won $200,000 in a scratch-off lottery game. Now when he pays for his annual tax prep and filing fee, he gives his tax pro a lottery ticket as a tip. So far, the tax preparer hasn't been as lucky as his winning client.

Another NATP member gets a bottle of Scotch for professional tax services each April.

Despite the variety of the noncash tips, they all have one thing in common. Their values must be reported by the recipients as income.

If you receive gratuities at work, be they a few dollars or a ticket to your local theater's latest musical or a new vehicle, remember to include them on your taxes.

IRS Publication 3148, Tips on Tips, has details for all affected workers.

No more tip taxes: This election year, tipping has become part of the Minnesota governor's race.

Republican gubernatorial candidate Tom Emmer first suggested that tips be factored into the hourly pay of minimum-wage workers. His campaign estimated that such a move would save eligible workers up to $17 million.

Then Emmer took it a step further. If tips remain, he says Minnesota shouldn't tax that income.

Tips on tipping: The NATP folks who got tips are lucky. According to TipGuide.org's etiquette guidelines, the recommended amount to tip accountants is zero!

Additional tip guidelines are at Tip by Profession. The recession's effect on tipping is explored by Marketplace. Travel Sense has some advice about tips when on the road.

And The Digerati Life asks the always debatable question, Why Should I Tip?

I was trying to give them the benefit of the doubt ... keep a lightning bolt from striking me! But I defer to your professional expertise.

If you think clergy report their tips, you haven't done many of their returns.