The longer the Senate screws around with considers changes to the tax extenders bill, the more the legislation grows.

The latest word from Washington, D.C., is that the Senate's biggest advocate of the first-time (and more) home buyer credit is at it again. And this time he has help from a colleague on the other side of the aisle who just happens to be in a leadership position, not to mention in a tough reelection battle.

Sen. Johnny Isakson (R-Ga.) has offered an amendment (number 4334) to H.R. 4213, the American Jobs and Closing Tax Loopholes Act of 2010, that would give certain prospective home buyers through Sept. 30 to close on a residential purchase.

Majority Leader Harry Reid (D-Nev.) has added his name to Isakson's effort. Not only does Reid represent a state that's been hit hard by the housing industry downturn, he's facing a serious challenge this fall for this Senate seat.

It's not being too skeptical to note that this 90-day credit closing extension would allow a lot of home purchasers to get a tax break on their new properties just weeks before they go to the polls in November.

Short sale relief: The proposal wouldn't significantly affect future home sales since the extension would apply only to home buyers with a contract in hand by April 30.

But it would help buyers involved in short sales, which have become a major alternative to foreclosures in Nevada, accounting for about 30 percent of home sales in Las Vegas alone.

The process, however, typically takes four to six months and there's been concern in the Silver State and elsewhere that these transactions would not be completed by the impending April 30 tax credit deadline.

Housing data from a variety of sources indicate that the hike seen this spring in pending home sales might not necessarily translate into sales as many probably won't become final by the credit's deadline. 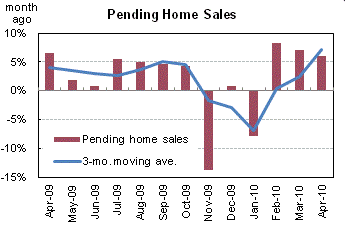 Many of these latest buyers pushed their luck and bought in April in hopes that expedited mortgage paperwork would qualify them for the break. That's not going to happen in many cases, said outlook and commentary services firm Econoday senior economist Mark Rogers.

"By extending the transaction deadline, we can ensure that everyone taking advantage of this credit can complete the purchase of their new home," Reid said in a statement of his support for the credit closing extension. "The first-time home buyer tax credit was very popular and successful in Nevada. In addition to making it easier for thousands of Nevadans to purchase their first home, it helped reduce the sitting inventory of homes."

Whether Isakson and Reid can convince their colleagues remains to be seen.

Changes to S Corp proposed tax changes? Also getting added attention is the proposal to pay for some of the extended tax breaks by applying payroll taxes to the share of business profits earned by many S corporation shareholders.

The tax issue came up at a June 10 Senate Finance Committee hearing on U.S.-China relations when committee member Michael B. Enzi ( R-Wyo.) diverged from international concerns to point out that the S Corp proposal had not been "vetted by congressional tax writers."

Opponents of the proposed tax expansion got a glimmer of hope when Senate Finance Committee Chairman Max Baucus (D-Mont.) acknowledged that he is "very sensitive" to Enzi's concerns and said the provision "needs some work."

However, the chairman also said the S Corp provision is an attempt "to correct an abuse there, but in a way that's not burdensome."

House push back, too: And on the other side of Capitol Hill, there are reports that some Representatives are unhappy with Senate changes to the House version of the tax extenders bill.

The biggest concern is said to come from key House Democrats who are adamantly opposed to the Senate's suggestion to scale back the tax increase on investment managers' carried interest earnings.

So the tax extenders battle goes on.

And it's definitely starting to look like my Twitter tax pal Eligabiff is onto something when she said, "I think I will just plan on this passing in December!"