Your patience, please, for a bit of tax wonkery. 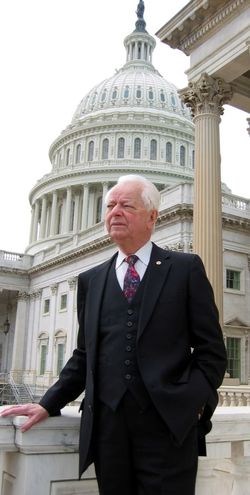 Sen. Robert Byrd passed away yesterday at age 92. As the longest-serving member of Congress (51 years in the Senate and six prior to that in the House), it's no surprise that he had a big influence on the ways our laws are made.

Most folks will remember Byrd for all the federal money he got for his West Virginia constituents. Remember, under our system of representative government, that was one of his key jobs and he was very good at fulfilling it.

But Byrd also had a lasting effect on Congressional budget and tax policy.

The long-time legislator is responsible for the Byrd Rule which says, in part, that a reconciliation bill may not increase deficits in the fiscal years beyond the legislation's budget window. It's invoked by raising a point of order in the Senate.

The late-Senator's namesake rule came into play during the debate on the extension of the 2001 and 2003 income tax cuts. Supporters of the cuts wanted to enact them permanently, but opponents used the Byrd Rule to have the tax reductions sunset at the end of 2010.

The rule, created in 1985 and adopted permanently in 1990, actually has six parts and the upshot of a Senator invoking it is that a vote of 60 Senators is required to overturn it.

Eric Kroh looks at the key ways the Byrd Rule came into tax policy play in his Tax Analysts article "Byrd Influenced Tax Policy With Reconciliation Rule" (subscription required). In addition to its effect on Dubya's soon-expiring tax cuts, Kroh notes that the rule "was also influential in the drafting of the Tax Increase Prevention and Reconciliation Act of 2005."

You can read more on the Byrd Rule in The 50-Vote Senate. The rule also is discussed in this Center on Budget and Policy Priorities' federal budget process primer.

Official word on the rule can be be found in this Senate Budget Committee backgrounder, as well as in this House Rules Committee summary.