Refund loans and the once-a-year 'rich'

And, notes the author of a new book about the big business of payday lenders, it's the tax code that makes these folks relatively rich for a short time, as well as makes them prime targets for operations pushing refund anticipation loans.

These loans, usually referred to by the acronym RAL, take advantage of expected -- or hoped for -- refund money that taxpayers might get from the IRS thanks, in many cases, to the Earned Income Tax Credit (EITC).

This anti-poverty program that's been around for 35 years gives tax money back to folks who earn relatively low incomes. Taxpayers with children can get larger EITC amounts.

And the credit is refundable, meaning that even if no tax is owed, the filer could get a refund.

But "could" is the key word. If there are offsets against that expected refund, such as child support or federal student loan debt or unpaid taxes from prior years, the refund won't materialize.

In those cases, the RAL recipient doesn't have the IRS funds to pay back what was advertised as a short-term loan. So he or she must come up with money to make the RAL payback.

Making money off the poor: RALs are just one way that millions of dollars are being made off of the working poor. 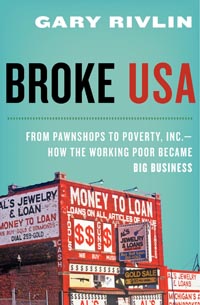 Rivlin looks at the many options in his new book, Broke, USA: From Pawnshops to Poverty, Inc. — How the Working Poor Became Big Business.

In an interview yesterday with Terry Gross on the NPR program Fresh Air, Rivlin said that the high-fee, high-interest loans against potential IRS refund money are "my favorite of the businesses just from that narrow perspective of "My God, somebody thought of this!"

The segment on RALs is just after the 27th minute of the interview, but I recommend you listen to the whole thing. Rivlin provides great background on the business of payday loans, including a look at U.S. usury laws and such tidbits as how the loan operators portray themselves as "heroic" because they open stores in economically disadvantaged neighborhoods.

Yeah, whatever gets you through the night.

He also notes how Walmart, which often is a target itself for some of its practices, is helping undermine the free-standing payday loan business. By offering much cheaper check cashing services at its stores, the ginormous discounter is siphoning business from the loan-specific companies.

Of course, by charging less of a fee, it's giving folks more of their money in hand to spend right there int he store where they came to cash the check. But at least it's a choice they can make.

But the cost these loans pose for providers combined with the bad economy is finally taking a toll on this sketchy products.

The lender with whom tax preparation chain Jackson Hewitt partnered could provide only half of the needed money for such loans this year.

Even more notable, this filing season H&R Block, which in past tax years had heavily promoted ancillary financial products, didn't do so as much. Part of it was financial, but the company's CEO also told investors before the tax filing season kicked off that the firm was moving away from an "overemphasis" on "fast money" because it damaged the company's brand image.

The lesson from all of this is that our economic system allows anyone to make money. But we don't have to be the suckers helping them get rich at our expense.

Thanks to today's technology, there's really no need to pay extra for a RAL. Electronic filing is more widely available and , even better, is free for most folks who don't make a lot of money, either directly via tax software providers or the IRS Free File program.

That means taxpayers can get their refunds sooner and without giving part of it back in middleman costs.

Here's hoping that means RALs will one day be history.

Elizabeth,
You point out a huge group of folks who are literally caught in the middle -- preparers who work for firms that offer RALs. You have to deal with folks who depend on refunds and want that money ASAP. There are no easy answers. I wish folks would/could manage whatever money they have and their taxes better, but then I still tend to be idealistic! I wish RALs would just go away. I know year-round payday lenders will always survive, and I understand living hand-to-mouth (I once did that, too), but the connection of taxes and these loans is bad for our tax system, preparers, taxpayers -- everybody but the companies making the money ont he fees/interest.

As for the EITC, I agree that this well-meaning effort to help out the working poor needs to be revamped. It's too complicated and opens itself up to honest mistakes as well as flat-out fraud.

Sadly, we're stuck with taxes being so interconnected to social policy. And despite lip service, I think most members of Congress don't really want substantive changes as it gives them too many things to rant for and against in elections.

Thanks for opening up this whole can of tax worms! ;-D
Kay

I work for JH. (Our franchise happened to be able to still offer RAL's this year). I would not be unhappy to see them go. As long as they go across the playing field. As long as the option exists, we will continue to try to offer it. Otherwise that crowd of people will just go where they can get their money quickly.

However, the people that choose to get these loans will not be that happy I suspect. To them, this is just free money and they don't care how much it costs to get it yesterday. (For the most part). Eventually they will get used to it and RALs will be a thing of the past.

The part of society that these loans serve are a cash based society. They pay a huge amount of fees just to cash the check because they don't/won't/can't have a bank account. They typically spend the money on cars and TV's.

EITC is also a huge area of fraud and honestly I'm not sure I wouldn't be unhappy to see it go as well.

I highly encourage you to read Bridges Out of Poverty to understand this class of people in our society. I read it to help with my volunteering for CASA (Court Appointment Special Advocates) and it was a huge eye opener for me.

Ok I could debate about this for awhile so I'll stop now. :)