I gave up smoking more than 28 years ago. I was lighting up almost three packs a day back then, but my new hubby didn't smoke; never had.

He dealt with it while we dated, but as a wedding gift to him, I quit.

It's turned out to be one of the best health and financial moves I've ever made, especially now that states and cities are regularly hiking tobacco taxes to try to close their budget deficits.

The latest cigarette tax increase comes from New York lawmakers. On July 1, that state's excise tax on cigarettes will go up another $1.60. That will push the current tax rate to $4.35, the highest in the nation.

When the new tax takes effect, the average price of an Empire State pack of cigs will be $9.20.

If you run out of smokes in the Big Apple, it'll cost you even more to feed your need for nicotine. Thanks to New York City's separate cigarette tax, a pack will run around $11.

Yikes! That's more than I used to pay for a whole carton of cigarettes!

Taxing trend: The move by more jurisdictions to tax what are considered bad habits is not new. It has, however, become more popular as states' economies have soured.

Heck, you know times are tough when the legislature in South Carolina, a place where tobacco farming and processing has a long history, gets in on the tax act.

Today the state collects only 7 cents each pack of cigarettes. But on July 1, after legislators overrode the governor's veto, the state will increase its tobacco tax by 50 cents per pack.

As the map below from Campaign for Tobacco-Free Kids shows, with the tax hike to 57 cents in a few days, the Palmetto State will hand the dubious honor of lowest tobacco tax in the country to Missouri. 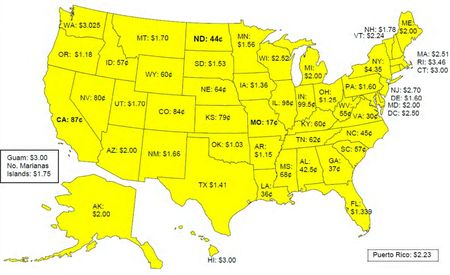 The fact sheet accompanying the cigarette tax map also notes that the state abbreviations in bold indicate that Missouri, California and North Dakota haven't increased their cigarette tax rates since at least 1999.

If you prefer the tax info in table format, the anti-smoking group has that, too.

And FYI, Uncle Sam's federal excise tax on cigarettes increased from 39 cents per pack to $1 per pack on April 1, 2009.

It's good for us: There's no argument that smoking and other tobacco products are bad for users and folks who deal with second-hand smoke.

But tons of health-related data aside, the real reason states and other other jurisdictions are hiking these taxes is for the money. The "for your own good" argument is, if you'll pardon the pun, a smoke screen.

It's true that when it comes to addictions, most of us don't give them up until the cost, be it to relationships, our health or our finances, gets too great.

And studies have shown that higher cigarette prices do seem to prompt younger smokers to quit.

From the lawmakers' point of view, taxing what most folk consider a distasteful act is easy politically, at least as long as most of the taxed are in the voting minority.

The end point dilemma: But the bigger problem is where do you stop?

The federal tanning bed excise tax ostensibly will convince some people to avoid a potentially cancer-causing activity while, of course, helping pay for some health care reform costs.

Taxing sugar-sweetened beverages could drive folks to drink less and lose some weight, helping to reduce the obesity epidemic in the United States.

Heck, even driving a gas guzzler is considered a sin by some. So is a higher fuel tax around the corner?

Things can quickly get out of (or, some say, more out of) control. And if the taxes do prompt people to change their habits, then the tax doesn't serve its real money-making purpose.

What we really need is for lawmakers to just be honest -- I know, crazy talk! -- and admit that the tax hikes are because legislatures are out of cash. Any benefits to our well-being and society in general is just a bonus.

The tobacco tax payoff: Just how much money do governments make off tobacco taxes? In 2009, the United States collected a combined $15.8 billion in gross cigarette excise taxes.

The where do we stop problem is exactly it. And what's worse is that the data people use is not always accurate.

Vegetarianism is a great case in point -- there is a great deal of medical evidence against this idea as well, it just doesn't get as much press.

On a personal level, I'd starve: vegetarianism made me sick as dog. Once I shifted my calorie consumption to primarily animal proteins, I feel great and am sick far less often.

During the low fat craze, no one would have even thought of taxing sugar, which I believe is much closer to the real issue with obesity.

Bottom line is that "sin" taxes or any taxes based on a few isolated studies or the fad of the moment(yes, I'm thinking about cap and trade) is not good government or science.

The other real issue with sin taxes is smuggling. It would not shock me that NY would start to develop an underground of cigarettes. At $11 per pack in NYC, there is a lot of incentive to provide smokers with tax free smokes.