The tax clock is ticking, but well-prepared taxpayers won't take a licking from the IRS if they follow our fourth entry into the inaugural Midyear Tax Moves feature. (Thanks to Timex and John Cameron Swayze for the inspirational turn of phrase and the memories!)

Today's timely tax tip comes from Robert D Flach, the Internet's  Wandering Tax Pro, who reminds us that Uncle Sam wants estimated tax payments when we expect to owe more than $1,000 when we file our 1040s.

The second 1040ES voucher of 2010 was due just last week, but it's never too late to assess your estimated tax situation.

The IRS assesses penalties for underpayment of estimated tax based on income received in 4 not-exactly "quarterly" periods. The amount of estimated tax liability is based on net taxable income (after allowable deductions) received for the periods ending March 31st, May 31st, August 31st and December 31st.

You should review your income for the first 5 months of the year.  Did you make a big score – from the sale or investments or vacation property, excessive premature withdrawal from a pension plan or account, big gambling or prize winning – on which you were underwithheld or had no federal or state tax withheld?  You may want to make a federal and/or state estimated tax payment to cover the additional amount that will be due on the score.

If you are charged a penalty for underpayment of estimated tax your tax professional can attempt to reduce or eliminate it by "annualizing" your income by the 4 periods mentioned above.

At this point you have missed the June 15th 2nd Quarter payment date.  But it is not too late to send in an estimated tax payment.  The penalty is calculated on a daily basis, so sending a check by June 30th is better than waiting until September 15th, which is the 3rd Quarter payment date.

You should do the same thing in the beginning of September. 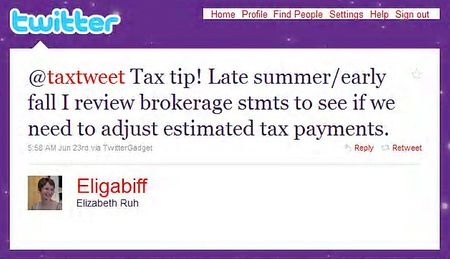 "Of course," adds Eligabiff, "most of my clients that were hit by tax bills because of capital gains a few years ago now have a huge loss carryforward. … I also encourage self employed clients to do a review of income/expenses in the fall to adjust estimated taxes as well."

More midyear tax tips on their way: Thanks to both RDF, who's on Twitter @rdftaxpro, and @Eligabiff of Personal Financial Services for the estimated taxes contribution to Midyear Tax Moves.

If you have a tax move we can make now to help reduce our upcoming 2010 tax bill, we'd love to hear from you. I'll be posting the tips, one a day until we run out.

And if you want a chance to win a New Yorker desk diary, check out the details here (the entry deadline has been extended to June 27).

E - thanks for the clarification; I was going by the link from your Twitter page. - K

Thanks for the mention! I actually prepare taxes for Jackson Hewitt Tax Service, as an Enrolled Agent and General Manager.

Personal Financial Services is a Company I am a Partner of where we offer mostly Guardianship Services and bill paying assistance. PFS does not prepare tax returns.