Did we learn nothing from Leona?

The daughter of the late corporate raider Victor Posner passed away in March, leaving millions to her three dogs and hired help. Her son, however, received only a nominal (compared to the chihuahuas) inheritance.

Now he's trying to overturn the will.

Again, I must ask: Didn't the Leona Helmsley situation -- millions to Trouble, cutting some relatives out of her will -- teach us (or rather, Gail Posner) anything?

I understand loving your pets. They are indeed furry family members. And I agree that often they contribute more to some people's lives than do human relatives.

But you've got to know that those same human heirs are going to fight for your money once you're gone. Especially if you're, say, a bit eccentric.

In a filing with the Miami-Dade probate court, Carr is claiming that this mother was manipulated by her household staff into changing her will in 2008, leaving millions to her dogs and hired help. The Miami Beach socialite left Carr $1 million, but she bequeathed seven staff members (bodyguards, housekeepers and other aides) $26 million.

The staff, some of whom must live in the mansion and take care of the dogs (ah, such tough luck!), allegedly played on Posner's devotion to what have been called the world's most spoiled dogs.

April Maria, Lucia and Conchita, who apparently was the favorite, enjoyed Cartier necklaces as collars, spa treatments and, in Conchita's case, custom-made wigs. I told you she was the most-loved pooch! 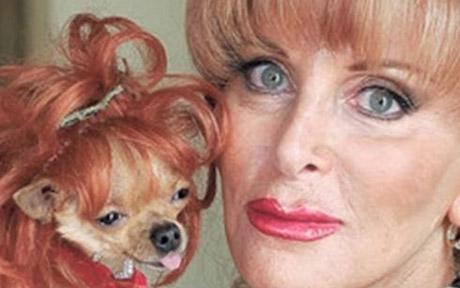 Helmsley's family managed to get much of the New York City hotelier's bequest to her Maltese overturned. We'll just have to wait and see if Carr is as successful.

If he is, Carr will be in much better shape that Helmsley's family, who had to deal with the federal estate tax when she passed away two years ago. Because of Congressional inaction, the U.S. Treasury doesn't get (or at least not yet) a chunk of Posner's millions.

Latest family legal, and tax, battle: The Posners also fought over the family's riches when Victor Posner died in 2002.

And in 1988, the corporate takeover artist faced tax evasion charges. Victor pleaded no contest to those charges and fraud for inflating the value of land he donated to Miami Christian College. He was ordered to pay more than $6 million in costs and fines and to devote 20 hours a week for five years to working with the homeless.