Attention online gamblers. When you go to ante up today, your bet is likely to be refused.

Actually, many online gamblers have for months already had to find alternate routes for their e-betting.

Earlier this year, online poker rooms and other gambling websites reported that Visa and MasterCard were already blocking transactions for placing bets. The actions by the card networks have forced many sites to secure, if not already implemented, alternate payment services. 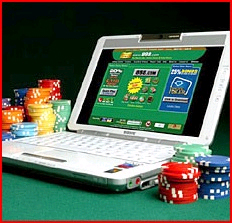 But starting today, such efforts to stem online gambling will be mandatory, not voluntary.

This prohibition has been a long time coming.

Dubya signed the SAFE Port Act, which contained the internet gambling provision (UIGEA), into law in October 2006. Banks were supposed to enforce the measure last December, but upon request of Poker Players Alliance and a group of Congressmen, Treasury Secretary Timothy Geithner granted a six-month extension.

The ostensible reason for the push back to June 1 was to allow banks and their card companies more time to structure compliance measures.

But it also has given some members of Congress time to push legislation that would erase the UIGEA requirements.

But the possibility of taxing online gambling has already come before a Congressional panel.

At a May 19 House Ways and Means hearing on a $42 billion proposal to legalize and tax Internet gambling, lawmakers in both parties raised concerns about how such a move could affect the overall traditional gambling industry.

In addition to the legalization of Internet gambling, a separate measure would create a 2 percent gambling deposit tax on betting website operators. States and tribal authorities could also could add another 6 percent deposit tax instead of levying their own separate taxes, said Rep. Jim McDermott (D-Wash.), author of the gambling tax measure that likely would become a part of Frank's larger bill.

"Prohibition hasn't prevented the millions of Americans who want to gamble online from doing it," McDermott testified before the committee. "It has forced Internet gambling operators to work offshore, it has put consumers at risk, and it sends billions in dollars of revenue to other nations."

McDermott believes his bill could raise $42 billion over 10 years, with states also seeing a boost in tax revenue. In addition,he said that the tax proposal could generate close to 30,000 jobs in the first five years.

Most of the billions in new federal revenue, McDermott told his colleagues, would come from individuals who win money gambling on the Internet and then declare their winnings on their income taxes. Licensed gambling operators would be required to send the IRS and the gamblers annual 1099-IG tax forms, listing the customers' net winnings or losses.

Congressional opposition remains: The main arguments against legalization and taxation of online gambling focus on the social ills that sanctioned online gambling could bring.

Lawmakers who represent areas that are home to brick-and-mortar gambling operations also object to the effort. Casinos operate in a dozen states and on tribal lands in 28 states; 42 states have government-backed lotteries.

Nevada Reps. Shelley Berkley (Democrat) and Dean Heller (Republican) both criticized the proposed deposit tax, raising questions over its structure and arguing that the online industry was better served by regulation and not taxation.

Reps. Earl Pomeroy (D-N.D.) and Danny K. Davis (D-Ill.) also worry about potential jobs losses on North Dakota Indian reservations and on Illinois riverboat casinos if consumers choose to gamble at home via the Internet instead of visiting casinos.

And some lawmakers hedged their support, suggesting a two-step process. Legalize online gambling first and then reexamine how to tax it after an Internet-based industry is allowed to grow.

However, as the U.S. and states continue to struggle with deficits, the odds could be better for Frank's and McDermott's proposals.

The Joint Committee on Taxation says the gambling industry in the United States did $92 billion in business in 2007, with illicit Internet gambling accounting for an estimated $5.8 billion of that amount.

And such numbers definitely get the attention of tax-writing lawmakers.

The new Ways and Means Committee Chair Sander M. Levin, (D-Mich.) opened the May hearing by saying, "Internet gambling is no different than bricks-and-mortar gambling," and Congress should explore the tax implications of legalizing online gambling.

And Christopher Wagner, commissioner of the IRS Small-Business/Self-Employed Operating Division, told those at the hearing that the IRS is ready to work with Congress to enhance tax law enforcement in the area of Internet gaming operations.

The reason for Uncle Sam's support? Wagner testified that online wagering contributes to the tax gap.

So online gamblers, cope with the new law now. It might not be around for long.

Hey man that sucks for online gambling fans but I'd agree this is just going to push more organisations off shore.

Wow, that sucks for online gamblers...

whats to stop some one to move to a place like dubai and set up shop there for their gambling site and still market to the US gamblers using a vpn? you would never be able to tell the diference, not to mention you can get a merchant account just about anywere that will allow to take the credit cards and still make money wich makes kind of hard to regulate all this gambling sites.
Regards
Simon

Nice site. Great work.And bad news for gamblers.but according to me its great if its completely banned

This is a very bad news for online gamblers. Can they still use sites like paypal to bet online? If they can't, these online casinos and its players will find other means to continue online gambling.

I think this restriction in online casinos and e-betting is for the overall welfare of the people. This will help in right channelize of your hard earned money for the benefit of the state.

The Joint Committee on Taxation Report "Overview Of Federal Tax Laws And Reporting Requirements Relating To Gambling In The United States" http://www.jct.gov/publications.html?func=startdown&id=3683 was prepared for the House Hearings. It makes for an interesting read.