Tax Easter egg: voluntary payments to the ease the public debt are deductible

Since you and your kids have probably found all the Easter eggs by now, here's a hidden tax break that might have escaped your attention.

Payments you make to help pay down the public debt could be deductible.

No, I mean extra payments, not your basic tax bill.

And note the "could" qualification, which we'll get to in just a second.

But first the scoop, straight from the IRS, page 18 of the 2009 version of Publication 17, Your Federal Income Tax For Individuals: 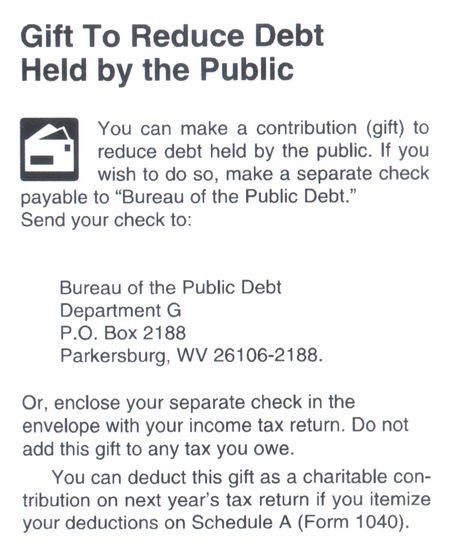 That last paragraph explains the "could" requirement. This money is considered a deductible charitble gift. To claim those, you must itemize.

Also, the donation must be made in the tax year for which you are filing. So unless you sent the Parkersburg, W. Va., debt office a check by Dec. 31, 2009, you can't claim this tax break on your current tax return.

If, however, you're so inclined to send a few dollars to the Bureau of Public Debt with your current Form 1040 (separate check, please), be sure to deduct it when you itemize and file your 2010 taxes next year.

Not many donors: OK, it's not a major deduction.

According to the IRS' 2005 Data Book (page 9; the latest year the agency reported this particular bit of info), it that year point collected only 48 such contributions. Of course, there might have been more that went directly to the Bureau of Public Debt.

The amount donated to help out Uncle Sam's bottom line that year was $21,179.

The IRS also reported back then that since 1982, it had received more than 16,000 public debt payments with tax returns, accounting for $9.8 million dollars.

A mere drop in the proverbial bucket, especially since the national debt continues to grow.

But at least a handful of taxpayers wanted to help five years ago (and probably a few since) and many of those filers probably took the corresponding tax deduction.

Tax breaks for 2009 filings: It's always good to do some advance tax planning, but for some ways to cut the tax bill you're staring at this filing season, check out 7 new laws that could save you money, as well as tax breaks without itemizing.

What is left to America is Freedom. While politicians are too busy killing each other to win the next election, the only real choice left for the citizen is to actively defend his or her freedom by helping reduce this pile of debt. The choice we face is simple: do I really need this new car/tv/whatever or do I want to held on a leash by foreigners for the generations to come.

They should advertise this more! Build it right into the 1040! I bet a ton of more people would take advantage