When I started the state tax tidbits feature last month, I said it was because I didn't write that much about state taxes.

Since then, it seems that every third tax item I've come across is state related. Best laid plans. Sorry.

But I couldn't resist this cool map. 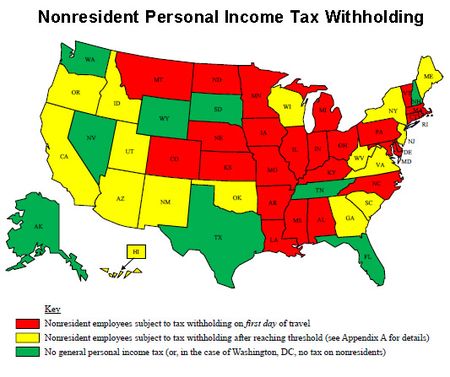 It's a reproduction of a Council on State Taxation graphic by Tax Policy Blog via a tip of the hat to Tax Update Blog. It shows how states levy income taxes on visiting workers and sometimes even on workers who don't cross their borders.

The map is part of the Council's Mobile Workforce Briefing Book. It contains testimony before the Multistate Tax Commission regarding the Commission's project to develop a model mobile workforce statute.

No longer trapped in cubicles: The hearing was yet another effort to come to grips with the changes in the modern workplace.

Companies are trying to find ways to more effectively deal with the tax ramifications of workers spread out across the country, periodically visiting the firm's headquarters or perhaps as telecommuters never showing up in the firm's offices at all.

Meanwhile, workers are faced with surprise state taxes withheld from their paychecks and handed over to a state they rarely (or never) visit. Full disclosure: This affects me personally since the hubby gets income from a Georgia-based company, as I ranted whined complained blogged about in The shared tax troubles of rich athletes and telecommuters.

"This mess of (occasionally conflicting) state laws can be confusing, not to mention expensive, for companies and their employees to comply with," understates the New York Times' Economix blog.

Federal legislation, again: So is there any hope for affected workers and companies? Maybe.

This issue has been around for a while, and every legislative session a bill or two is introduced to remedy it. The current one is H.R. 2110, dubbed The Mobile Workforce State Income Tax Fairness and Simplification Act.

The bill would limit the authority of states to tax certain income of employees for duties performed in other states. It would basically make state nonresident income tax laws uniform and impose a 30-day minimum threshold before employers would be required to withhold state taxes.

Oh yeah, it was introduced by Rep. Hank Johnson (D-Ga). Yes, I saw that Peach State abbreviation. Don't you just love the irony of a federal lawmaker from Georgia being behind a bill that could save me from Georgia state taxes? I know I do.

H.R. 2110 has 20 cosponsors and the support of many businesses, but it's been languishing in a House Judiciary subcommittee since its introduction in April 2009.

Whether it will progress this session remains to be seen. But at least with health care completed, some other legislation should begin to see some action on Capitol Hill. I sure hope this bill is part of that group.

Nicely put. This particular problem is becoming increasingly common in the age of telecommuting - this year, already, we've had clients who had to file tax returns for Massachusetts, Virginia, New York, Pennsylvania, and Arizona even though they were full-year residents of North Carolina and spent little (if any) time in the other states.

Note that many states, including NC, allow residents to claim a credit for taxes paid to another state.