More, and more well-off, tax filers
are not paying any taxes

As millions of us are staring down April 15, the big question we have is how do we pay Uncle Sam as little as possible?

Some folks have that answer totally figured out.

One-third of individuals who last filing season submitted a 2008 return paid no tax whatsoever, according to the Tax Foundation.

That's right. Almost 52 million people got back every dollar that was withheld from their paychecks in 2008. 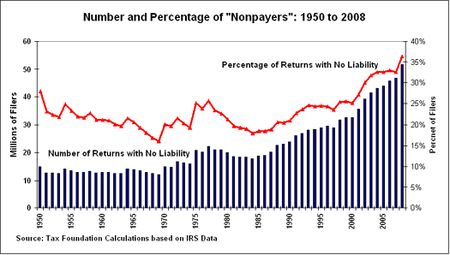 Some even made money via refunds, says the Washington, D.C., tax research group, turning Tax Day into a payday.

These are filers who, thanks to legal credits and deductions, owe Uncle Sam nothing.

And they're not folks just scraping by.

When this no-tax trend continues in 2010, and it will, a family of four will owe no income taxes even at an earnings level of more than $51,000.

How is this possible? Thank, or blame, your Representative, Senators and the last couple of Presidents.

But first take a minute to look at whether you, too, also benefited from the tax laws.

It's all about the children: The tax code has increasingly become a way for lawmakers to reward certain groups of taxpayers. We all know about the Wall Street bailout, but individuals also have been getting some added money from Uncle Sam more incrementally over the years.

Tax credits have been created or expanded to help myriad taxpayer groups: families with kids, college students looking for help paying tuition, drivers who want to save fuel and the environment, homeowners who want to lower their energy costs and tax bills.

The Tax Foundation says that in terms of sheer dollars, the most significant of these targeted credits is the child tax credit.

When it was created in 1997, it was worth $500 for each eligible child a taxpayer claimed on his or her 1040. Under Dubya's 2001 and 2003 tax acts, it doubled in tax-break value and a portion of the credit for some became refundable, meaning parents could get money back even if they owed nothing to the IRS.

The expansion of the child tax credits "supercharged" the trend of nonpayers.

When the 2000s started, a quarter of filers owed nothing. After changes to the child tax credit were fully phased in by 2004, that year the number of nonpayers increased by 10.5 million, a 32 percent jump from just four years previous.

Then came 2008. That year's Economic Stimulus Act and its rebates created a new record number of nonpayers.

And 2009 is likely to be a replay. Thanks to last year's American Recovery and Investment Act and subsequent tax tweaks we have more people eligible for more tax credits: employees who are Making Work Pay, first- and long-time home buyers and college kids who are taking advantage of the new and more generous American Opportunity Credit.

Meanwhile, the deficit is growing and the overall number of potential taxpayers is not keeping pace with those who end up not owing a dime.

Do we not teach math in schools any more? I have no kids (or child-related tax credit), so maybe this course has has been dropped since I last sat in a classroom.

What are we -- individuals and companies who constantly clamor for tax breaks as well as members of Congress who are constantly campaigning (you did notice that election years seem to conveniently coincide with increased tax breaks, didn't you?) -- going to do?

In 2010, it looks like we'll be making the same fiscal missteps as before.

Is it possible that we citizens of our sometimes civilized society will eventually realize that we all have to pay some taxes and give up some tax benefits for our system to continue? I hope so. But I'm not sure it will be soon enough.

And I also fear that given the tenor of today's tax policy debates and general political cowardice, things are going to get much worse before there's any rational discussions or substantive changes to how we pay for our national needs.

I don't like how the Tax Foundation pretends that this enormous tax doesn't exist when it suits their propaganda needs. And I really don't like when bloggers who should know better go along with it.