Oscars idiocy and a half-hearted hooray for Hollywood tax breaks

I think the Oscars' decision to nominate 10 movies for best film is stupid. The Academy of Motion Picture Arts and Sciences (AMPAS) is just pandering rather than seeking to honor the best in movie making.

The suits in the entertainment industry were worried that ratings for the annual awards show have been declining for the last few years. They thought if they included more movies, it would ensure that some popular ones, not just artsy works, would be nominated and that would get more viewers.

They pointed to the years when Titanic (1997) and The Lord of the Rings: The Return of the King (2003) cleaned up at the ceremonies. Folks, especially the younger ones advertisers crave and who saw those flicks over and over, tuned in.

So to make it easier for popular films to get in on Oscar action, AMPAS expanded the best film nominations to 10. The irony is that Avatar, the latest film baby of Titanic director James Cameron, arrived in theaters last year and immediately was a box office and critical favorite, assuring it of Oscar consideration. So the monkeys in suits in L.A. didn't need to bastardize the contest rules.

That said, I'll admit that the larger field helped a movie I like get an Oscar bid: District 9.

Still, I stand by my initial assessment. Ten films is five too many, especially when the change is made for the wrong reason. The Academy Awards are going the feel-good, self-esteem route of today's little league groups where every kid gets a trophy for just showing up.

Tax breaks for films: The annual Hollywood awards hoopla always brings to my tax mind the extremes government officials will go to just to get movie crews rolling film in their backyards.

I love movies. I get a big thrill when one is made in Texas or especially here in the Austin area. And I think productions do help boost local economies somewhat.

But the tax breaks to attract the film industry, like those to entice other economic sectors, can be badly abused.

Joe Kristan at Tax Update Blog is not a big fan of the credits. Of course, his home state of Iowa has had some major problems with its program.

Others also are dubious. A recent study by the bipartisan Tax Foundation found that in most cases the tax credits to attract filmmakers are costly and don't live up to their revenue-generating promises.

And Variety reported last week that the recession has prompted many of the states that offer film tax breaks to revisit their incentive programs as lawmakers cut corners.

Even Uncle Sam has gotten in on the act. Included in the tax extenders bill that passed the House but is still awaiting Senate action is a provision that offers filmmakers breaks for making movies in America.

Rather than make film and television productions depreciate their costs, they can opt to immediately deduct the first $15 million of their expenses; $20 million if the production is in a low-income community. To qualify, at at least 75 percent of the production's costs must be for services performed in the United States.

A new industry evolves: One sector that has benefited are firms that help steer production companies to the tax benefits. 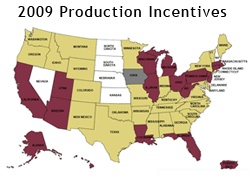 Although these accountants are based in the Northeast, they keep track of film tax breaks nationwide. That's Amper's map showing the states that in 2009 offered credits.

Tax Credits LLC has created a table of various film credits so that movie makers can see them side-by-side.

And Entertainment Partners doesn't limit its incentive searches to the United States. It provides clients with a global overview of the places willing to pay to have Hollywood magic made inside their borders.

Ah yes, the lure of Tinseltown is hard for tax writers anywhere in the world to resist.