The string of states lining up to tax online sales is nowhere as attractive as the Rose Parade, but it is a virtual tax parade. And the state that's home to that annual floral spectacular is now part of the group.

The California Senate has passed a bill that would require online retailers like Amazon to collect sales tax on Web purchases. The provision is part of a $5 billion budget package making its way through the Golden State's legislature.

CPA Diane Kennedy expresses the concerns of many Amazon (and similar) affiliates: 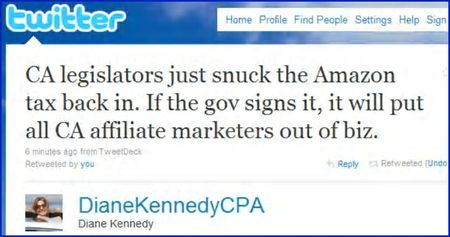 In several states that have passed or threatened such a tax, Amazon has pulled out, canceling its affiliate agreements.

The California Amazon tax comes on the heels of similar action by the Virginia Senate.

Alas, another example of government trying to stimulate itself at the expense of the economy, not contributing value commensurate with the charges it levies.

Speaking as a CA resident, we are also in the midst of driving out businesses with physical presence in the state, thanks to the increasing power of "green" legislation, pushed for by those who do not generate wealth themselves.