Right now I know you're focused on your 2009 tax filing, due which means you're concerned about what tax bracket last year's income fell into.

And then there's your 2010 tax planning. For that, you need to pay attention to the 2010 tax rates and income brackets.

But for those of you who really, really like to plan ahead or want to have something else to worry about, check out this very interesting table detailing the expected top tax rates for various types of income at this time next year. 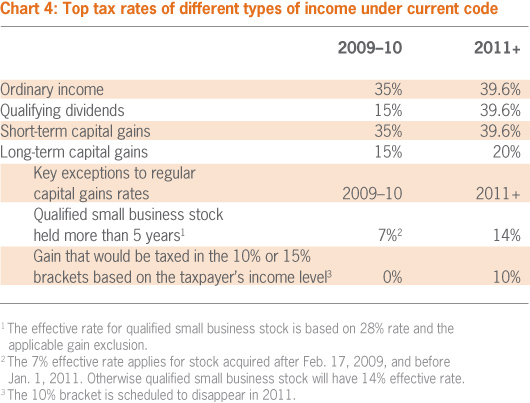 Yep, that's what could, might, is expected to happen on Jan. 1, 2011, after Dubya's tax rate cuts expire at the end of 2010. Thanks to the folks at Grant Thornton for putting such bad news for many in such a nice format.

During the presidential campaign, it looked like Obama was ready to snap the higher rates into place this year. Then the economy collapsed and tax hikes wasn't such a good idea.

Now we're into 2010. The economy is sorta picking up, but it's now an election year for most of Washington's lawmakers. And no politician wants to see taxes go up when folks are on their ways to the voting booth.

Plus, I have three words for you: Extenders, Estate Tax.

So what's going to happen? Who knows. My best guess right now is that the 10 percent rate will  stick around, as will the 15 percent one, which will continue to be wide enough to take care of some marriage tax penalty problems.

The top rate might not go back to almost 40 percent, but it probably will creep up a point or two.

I suspect capital gains rates are likely to revert to the previous levels. Since most folks who can take advantage of the lower rates tend to be higher income earners, that will give some politicians some cover.

The Child Tax Credit will not be cut in half. I'll guarantee that one.

And I'll bank on the estate tax being back in place with a larger exemption and lower rate than the 2011 figures before this year is over. Of course, I thought the estate tax would be a done deal long before now.

So as to how quickly the estate tax will be resurrected, I won't venture a guess! We are, after all, talking Congress.