If you're filing your taxes in January, it's probably because you're going to get a refund.

But for folks who will be facing an IRS bill and likely filing and paying later, one credit card company is already touting its new tax payment option: reward points. 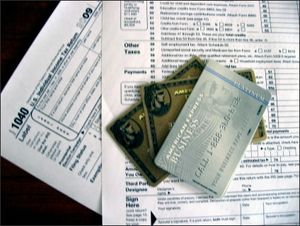 American Express customers who have Membership Rewards accounts can use those points to pay federal, state and local taxes. The company says the arrangement is a first for the credit card industry.

To make the option available, AmEx has partnered with Pay1040 and Official Payments Corp., the two firms that the IRS and most states have authorized to collect charged tax payments.

The AmEx offer sounds like a good deal, right? Well, maybe not.

To pay off $5,000 in taxes, an American Express rewards account holder would have to charge $1 million.

That's because, notes CNNMoney, it takes a "whopping 200 points to pay off just $1 in taxes."

Still, if you're a high-roller and have racked up beau coup points on your American Express rewards program, you can cash them in at tax payment time if you want.

Writing off credit card transaction fees: If you choose to pay your taxes with your credit card instead of any points you earned on it, remember that it'll cost you.

Credit card companies charge a fee for each use of the card. The merchants usually absorb this, but Uncle Sam isn't allowed to do so. So when it comes to charged tax payments, you have to eat this fee, 2.35 percent of your tax payment amount, when you use either Pay1040 or Official Payments to meet your federal tax obligations.

Now, however, you might might be able to deduct that fee. The drawback here is that you must count it as a miscellaneous expense.

That means, first of all, you have to itemize.

Then all your miscellaneous expenses must exceed 2 percent of your adjusted gross income.

So the $23.50 you were charged for putting your $1,000 IRS bill on plastic probably won't do you any tax-deduction good.

But it was nice of the IRS to offer, don't you think?

This is my first time i visit here. I found so many entertaining stuff in your blog, especially its discussion. From the tons of comments on your articles, I guess I am not the only one having all the enjoyment here! Keep up the excellent work.

As long as you can pay the tax within 6 months you don't have to use either one. It takes that long for IRS to take any action.

Great point, Wes. Obviously, it depends on the taxpayer, but if someone doesn't have the money to pay the IRS that person probabl is carrying a balance on his/her credit card. I hate to see that added to. Another option worth exploring in this case is an installment agreement with the IRS. But don't just not pay without talking with the IRS first.

Any comment on the whole idea of paying off debt with more debt? I know a lot of us don;t have great choices these days, but is it better to pay off what's owed to the IRS right away with a credit card or wait a few months until you can pay cash?