I know, this is an annual exercise that, like real exercising jotted on many New Year's Resolutions lists, usually ends up undone.

But I'm an optimist. Or at least I start out each new year as one. So we're trying this again! 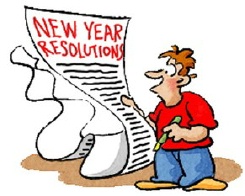 In 2010, though, I'm aiming for something attainable. That's why I have only one financial and tax resolution:

It sounds simple, and it can be. But simple doesn't mean it's not worth doing. Getting your money matters in shape is a great foundation for your whole life.

As we've all learned, stuff happens. When you have your critical financial and tax info at your fingertips, you're more prepared to deal with the unexpected (like pulling out your homeowner's insurance policy when the water heater bursts!), as well as take advantages of opportunities (like deciding whether a new project is worth working into your already hectic life).

For me, getting organized means, as a first step, moving all my relevant financial documents from their respective stacks on the floor (at least they're sorted that way!) and into the proper filing cabinet folders. Of course, that also means I have to archive or dispose of the material already in the cabinets!

As for tax organization, I vow to take all my tax documents I've collected in that box on my office closet shelf and put them into an accordion folder for ease of filing (I like to spread out in the den -- that floor thing again -- and do a rough draft by hand on paper before moving to my computer) in a few weeks. OK, filing in a few months.

By getting organized now, in January, I'll see what holes exist in my financial and tax documentation and can get to work filling them before that aforementioned stuff happens and I'm trying to deal with a money or tax crisis.

So see, it might just be one resolution, but it's one that affects a whole lot.

If you're also a little scattered like me, put getting organized on your 2010 to-do list, too. It doesn't matter what kind of system you use; just pick one (Get Rich Slowly has some suggestions) and use it.

What's ahead in 2010: If you're more of a traditionalist and want to make a bone fide resolutions list, there are lots of folks out there with suggestions.

I even got into the act via my gig as contributing tax editor at Bankrate.com. From that personal finance site, I offer you 10 astute tax moves in 2010.

The Debt Diva has her own Top 10 Financial Resolutions for 2010.

20 Something Finance makes it easy with a 2010 Financial Resolution Guide: 10 Choices – A La Carte Style.

Business Pundit also has 10 Financial Resolutions for the New Year.

MintLife says it has Financial New Years Resolutions You Can Keep.

Over at Consumerism Commentary, Flexo offers his Goals and Resolutions for 2010.

And while they're not tax-specific, tax attorney and Bard of Avon devotee Peter Pappas, who writes The Tax Lawyer's Blog, presents us with 14 New Year’s Resolutions, Courtesy William Shakespeare.

Whatever your resolutions, fiscally or otherwise, good luck in keeping them in 2010!

I agree getting organized for tax season is very important, and it can be very complicated. It will be a lot better to get a little help with your taxes this year.