In my preview of the tax extenders bill last week, I noted that the provision that gives special tax relief to motorsports complex owners could cause some problems with passage of the bill.

As it turned out, it wasn't enough to derail the package that continues expiring tax breaks beyond Dec. 31. The measure, including the so-called NASCAR tax break, passed 241 to 181. 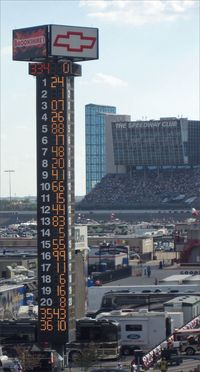 Under the law, facility owners can use a quicker seven-year depreciation schedule for new construction and improvements to racetracks, grandstands, parking lots and other facilities.

Now, however, some lawmakers are questioning the tax break, which was first enacted in 2004 and would cost an estimated $45 million to keep in place through 2010.

The Wall Street Journal reports that the NASCAR language has been singled out as suspect by some Democrats on the House Ways and Means Committee.

In addition, says the paper, the bill's technique of making some tax increases permanent, such as the levy on fund managers' pay, to cover the cost of temporary tax breaks isn't sitting well with some. Even the W&M chairman acknowledges that "it's no way to run a railroad."

So will the NASCAR tax break survive?

The House bill still has to go to the Senate and, if -- OK, when -- it's changed there, the two bodies will have to reconcile the different bills.

You can be sure track owners will be hoping their provision doesn't get black-flagged in conference committee.

In my monthly motorsports column for Randall-Reilly Publishing, the perfect gifts St. Nick can bring racers as well as us racing fans.

You get your choice of finding out who in the race world is naughty or nice in either my Truckers News Views From the Grandstands column or my Crazy Woman Driver piece in Changing Lanes.