The estate tax, a Dickens of a law

Not because it's December and he wrote the classic holiday story, A Christmas Carol. And not because it was on this day in 1867 that Dickens gave his first public reading in America, kicking off a four-month reading tour.

Rather, the impending attempt by Congress to resolve the estate tax reminds me of Dickens' Bleak House.

This week, possibly even today, the House will finally consider how to keep the estate tax from dying.

The tax currently has a top rate of 45 percent that's applied to estate values that exceed $3.5 million per person, which essentially doubles the exemption for married couples. But on Jan. 1, 2010, the tax is scheduled to disappear. Then it's supposed to return when 2011 arrives, but with a higher rate and a smaller exemption ($1 million).

Lawmakers on both sides of the aisle, though admittedly more Democrats than Republicans, agree that the tax should continue.

The main reason, of course, is the revenue it generates.

Plus, it applies to just a fraction of taxpayers (only 0.7 percent of deaths in 2007 resulted in estate tax liability in 2008), so you'd think that public opinion would support this relatively painless way to keep our federal deficit from getting even larger.

Against the 'death tax': Estate tax opponents have had great PR success in defining the law as a death tax with which Uncle Sam wrests long-held family assets from middle class heirs.

The problem, argue anti-estate taxers, is that family-owned companies are often asset rich, but cash poor. "This means they have considerable wealth in 'hard assets,' such as machinery, property, equipment, and inventory," writes Dick Patten in The Corner at National Review Online. "But they don’t have lots of extra money in the bank. When a family that owns such a business faces estate taxes, the hard assets often must be sold to pay the tax."

For an estate tax: Bill Creighton of United for a Fair Economy, however, sees thing differently.

"The federal estate tax is our country’s most progressive tax and our only tax on wealth. Since 1916, it has helped reduce the concentration of wealth that weakens our democracy," says Creighton. "The estate tax has been cut five times since 2001, with the result that few people, including farmers and small business owners, pay it now."

In fact, says Creighton and others who want the estate to continue, repealing the levy would increase the federal deficit by $1.3 trillion dollars over 10 years (Center on Budget & Policy Priorities calculations), which would put middle class in an even worse bind.

Legislation awaits: Get ready for more on both sides of the argument when the House considers H.R. 4154.

Will that happen? Maybe. But then it must go to the Senate, where the outlook is less clear.

Over there, Sen. Tom Carper, a Delaware Democrat, and Sen. George V. Voinovich, an Ohio Republican, have reintroduced which would freeze the estate tax at its current 2009 levels.

But some Senate Democrats say they want to index estate tax exemption levels to inflation.

And the biggest problem facing both the House and Senate is whether to make any estate tax law change this year permanent or keep it as is for just one more year.

Permanency would get the law off the legislative to-do list. That's generally a good thing.

But a short-term extension would give Representatives and Senators time to revisit the estate tax and, depending on the economy and deficits and whatever else is going on in 2010, tweak the law yet again.

Oh joy! Congress continuing to play with tax laws. And doing so usually at the very last minute, making it hard for any of us to make proper estate plans.

Who wants to bet on which option lawmakers will choose?

Personally, I suspect that since the Senate probably won't get to the estate tax until the very end of this month, we'll get a compromise one-year continuation. 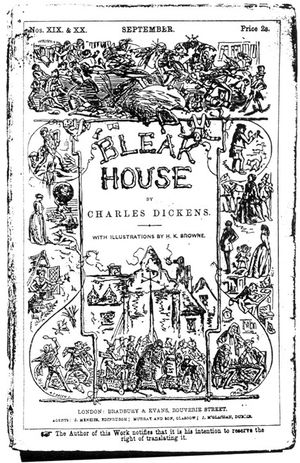 Dickens legal masterwork: And that brings me back to Bleak House. You thought I'd forgotten, hadn't you?

While Dickens' massive novel (900-plus pages) isn't about the British version of the estate tax, a generations-long legal battle.

In the book, Jarndyce vs. Jarndyce never ends, with lawyers and greedy participants dragging the once-simple case out for so long that it mutates into a court battle so complicated that, as one reviewer observed, no man alive knows what it means.

In fact, during the case's convoluted course, "scores of persons have deliriously found themselves made parties to the lawsuit without knowing how or why."

Now doesn't that sound like Congress in general and the estate tax laws in particular?