Tax trouble for another Obama appointee

No, you are not caught in a time warp. Another candidate tapped by President Obama for federal office has a bit of tax trouble. 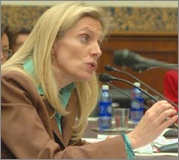 Lael Brainard has been nominated to serve as Treasury undersecretary for international affairs. Her confirmation hearing finally got underway last week.

The process was held up when Brainard's tax troubles were revealed. Brainard was late in paying property taxes on her Rappahannock County, Va., home in 2005, 2006, 2007 and 2008, incurring $1,401.09 in interest and penalties, according to a Senate Finance panel staff report.

She also was late on $485 in personal property taxes owed for 2007 on a Dodge pick-up truck.

Plus, there were issues with a home office deduction.

The Associated Press reports that Brainard had paid all those taxes and penalties, except for the 2008 taxes, by the time she was nominated in March 23.

That tidbit about Brainard's husband and his easy sailing into his high-level federal job bothers me bit.

I know Brainard's position, if she's confirmed, would be with Treasury. Folks who are responsible for the country's and taxpayers' money need to be above reproach. It definitely doesn't look too good if they can't handle their own finances and taxes properly.

And in general, I don't have a problem with a person who doesn't properly file his or her taxes dealing with repercussions from such mistakes or willful noncompliance.

But how come this didn't come up at Campbell's confirmation hearings?

Did he and Brainard file separate tax returns?

Maybe the truck was hers, but does she alone hold the deed to the house on which the property taxes were due?

Or is the Senate Finance Committee staff just more thorough than the crew that vetted Campbell?

Even though Campbell is in another area of public service, he too should have been held to the same standards his wife is now facing.

The past is prologue: Can you name all the Obama nominees who've had their dirty tax laundry aired?

Former Senator Tom Daschle, Obama’s choice to head the Health and Human Services (HHS)  Department, withdrew from consideration, as did Nancy Killefer, who had been nominated to fill the new post of Chief Performance Officer.

Tax problems surfaced in the confirmation processes for, but did not derail, the nominations of  Treasury Secretary Timothy Geithner, U.S. Trade Rep. Ron Kirk and eventual HHS Secretary Kathleen Sebelius.