If your holiday gift list includes "dishwasher for Mom" or "deer rifle for Dad," then get ready for a tax-free bonus if you do your Black Friday bargain hunting in West Virginia or South Carolina.

These two states are offering shoppers a chance to pick up energy efficient appliances and guns tax-free.

That's right, you can get a new environmentally friendly refrigerator … .

Oh, you want to hear about the tax-free guns first? Gotcha. 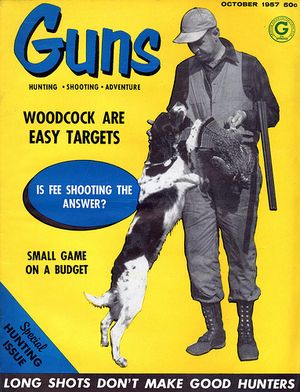 Initiated in 2008, this two-day no-tax event takes place on the Friday and Saturday after Thanksgiving. This year that means on Nov. 27, aka Black Friday, and Nov. 28 you handguns, rifles and shotguns without paying any sales tax.

But take note. been eyeing that antique Civil War rifle for your spouse who's into battle reenactments, hold on. The law authorizing the tax holiday specifically says that you'll still owe sales tax on "any firearm generally recognized or classified as an antique, curiosity, or collector's item, or any that does not fire fixed cartridges."

You'll also have to pay taxes on your weaponry's ammunition, as well as on carrying cases, gun safes and hunting gear, just to name a few taxable gun-related accessories.

And remember that although you'll also be shopping for the kiddies on Black Friday, all toy guns are still taxable. Believe me, someone would try to escape the Palmetto State's 6 percent sales tax on Junior's toy Tommy gun if this wasn't explicitly spelled out in the law.

The full list of taxable purchases during the Second Amendment holiday is on page 3 of the South Carolina Department of Revenue ruling on the event.

Back in May, the state's Supreme Court declared the Second Amendment holiday and a separate Energy Star sales tax holiday were unconstitutional.

Actually, it wasn't so much a problem with either holiday, but rather with the law that created the no-tax events. Apparently it violated the state constitution's "single subject" rule, which prohibits stringing unrelated measures together in a single bill.

After the court handed down its decision, South Caroline canceled the two tax holidays. But not for long, at least when it came to the gun one.

Firepower aficionados got a special piece of legislation when the South Carolina's General Assembly tacked a court-acceptable Second Amendment Sales Tax Holiday onto the state's 2010 appropriations bill. But that also means that the gun tax holiday is temporary and won't be on the calendar in future years unless -- wait for it -- lawmakers reauthorize it again.

I'm willing to bet that since South Carolina lawmakers were able to make sure that folks who wanted guns didn't miss a beat when it came to tax holidays in 2009, they'll find a way to keep the Second Amendment Tax Holiday alive in 2010 and beyond.

Now about those washers … .

West Virginia's energy saving tax holiday actually has been in effect since Sept. 1. But this year, the holidays second, in addition to doubling the price upon which buyers will owe no tax, lawmakers also expanded the holiday from a week to three months. It runs through Nov. 30.

The state issued a statement detailing which products are eligible for the sales-tax-free treatment, as well answers some common questions about the appliances and associated products and services.

Taxes as usual in Washington, D.C.: No, I'm not talking about Congress this time.

In previous years, the District of Columbia has held a couple of sales tax holidays. That's not happening in 2009.

The National Capital holiday season sales tax holiday traditionally began on Black Friday and ran through the following Friday. But budget concerns prompted the District's leaders to pull the plug on the late November-early December event.

This is the second sales tax holiday that D.C. called off in 2009. Earlier, the August back-to-school no-sales-tax event was canceled. District officials said they couldn't afford to forgo the estimated $640,000 in sales tax revenues that they'd lose during the late summer holiday.

Maybe D.C. shoppers in the market for a new appliance can head over to nearby West Virginia later this month. Of course, they'd still owe the D.C. 6 percent use tax on their purchase. So I guess they'll just have to hope that 2010 offers a better tax holiday climate.

And remember, despite what deals you might get, from special Black Holiday sales or tax-free holidays, you usually don't save money by spending it. So don't go shopping just to keep a few dollars out of the tax collectors' hands.

Double tax coverage, not collections: I also covered these sales tax holidays in Black Friday tax holidays for my Bankrate.com blog, Eye on the IRS.

very useful for me thanks

funny, useful article. I'll make sure to get my dad a rifle next time.
military computer financing

For $3.6 billion a month, couldn't we just buy and own the country?