Is it just coincidence that this morning a federal judge, who reportedly is a movie buff, heard the tax conviction appeal of an actor who played a vampire hunter on the very day that the second installment of the pop culture phenomenon Twilight film series hit theaters? 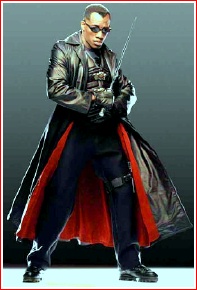 And could that convergence mean that things are lining up on this freaky Friday for Blade star Wesley Snipes to have his tax troubles legally erased?

I personally enjoy interesting intersections of randomly related occurrences, but most of the time they are indeed just happenstance. And that's likely the case for Snipes.

So back to the facts, ma'am.

The 11th Circuit three-judge panel that heard oral arguments in Snipes' case included film fan Judge Stanley Marcus. (Thanks, TaxProf for the tip, on the hearing and the judge's entertainment preferences.)

There's no word on whether Marcus enjoys Snipes' films in general or the Blade trilogy in particular. Neither do we know what he thinks about all the Twilight mania.

Regardless, I'm sure Marcus' cinematic proclivities won't affect his legal judgment in any way.

Meanwhile, a couple of other celebrities, and I use that word in the very loose way that it's bandied about nowadays, also are facing some tough tax issues.

'Girls Gone Wild' founder facing tax lien: Unfortunately, I was wrong when I announced in September that our tackiest national tax nightmare was almost over. It's not.

Joe Francis, founder of the Girls Gone Wild video franchise, has been hit with an IRS lien for the almost $34 million that the agency says he owes in unpaid taxes for 2001, 2002 and 2003.

On the criminal side of the tax charge, Francis earlier this year worked out a plea deal for time served. But the tax money portion was left to be worked out.

'Dancing' star doing a tax tap dance:  A celeb with a more benign public persona also is in tax trouble.

Former teen idol Aaron Carter, seen most recently on ABC's Dancing With The Stars, is facing a $1 million IRS lien.

Carter's manager says the pop star's tax debt is the fault of a former management team. Carter, say his people, was "completely unaware" he owed back taxes until he heard bout it in the media.

Looks like in addition to getting a good tax attorney, the young Mr. Carter also needs to revisit his current management team if they also were oblivious to or just didn't tell him about his IRS obligations.