The IRS has more than 50,000 content pages at www.IRS.gov but it's not stopping there.

"We're looking at building a new portfolio of electronic products," Tom Davis, acting chief of staff for Electronic Tax Administration, told tax professionals at the IRS Nationwide Tax Forum in Dallas last month. The ultimate, although admittedly improbable, goal is to drive all service to the IRS Web site. 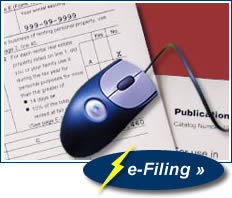 The agency has made major strides in this area. But it knows it's now at a crossroads, especially when it comes to the activity that affects every taxpayer: filing tax returns.

Millions of folks also prepared and e-filed their returns themselves this filing season, much to the IRS' glee. But the number of tax pro e-flings this year was essentially flat. And since more and more of us are turning each year to tax professionals for filing help, that stalled number is not good news for an agency that's been ordered by Congress to get 80 percent of us filing electronically ASAP.

"E-filing is leveling off," said Davis. "It mirrors e-banking in that individuals seem to have reached a comfort-level plateau."

Money matters: The IRS is well aware that one big e-filing obstacle is cost.

From the IRS' perspective, e-filing really pays off. It's much more cost-effective for the agency to process an electronically filed return than a paper one, 35 cents per e-filing vs. $2.87 per paper form.

For many taxpayers, though, e-filing typically means we must pay. So some folks opt for the cheaper postal delivery method. "We know the e-fling fee is a barrier," said Davis.

This filing season it wasn't so much of problem. The major tax software manufacturers absorbed the e-fling fee or rolled it into their overall package cost rather than charging it separately. That seemed to pay off for filers as well as the IRS, which, by the time the Dallas Tax Forum was held in early September, reported that 93 million returns had been e-filed.

But Uncle Sam knows better than to count on private industry to carry the no e-file fee load alone forever. So the IRS is examining possible e-file financial incentives. Here are some that Davis addressed in his Tax Forum session.

Reward paper converters
One perennial suggestion is to reward current paper filers who switch to electronic submissions. "But is that fair to e-filers who have e-filed for years?" asked Davis.

Reward e-filers
So how about rewarding e-filers somehow? One idea is to give electronic taxpayers more time to file. Folks who send in paper 1040s, for example, would have to do so by March 15, while e-filers could wait until the traditional April 15 deadline.

Of course, in addition to irking taxpayers, tax professionals might (probably would) balk at having a large chunk of their work compressed.

Make tax pros e-file
Another option is to force all tax professionals to file all their client returns electronically. "It would get us to the 80 percent [mandate] the quickest," acknowledged Davis.

But he noted that such an order is not likely until MeF, or the modernized e-file platform discussed in IRS, tax pros preparing for 2010 e-filing, is fully implemented. Some components will be available in 2010; the full MeF program is expected to be in place in 2012.

Expand Free File
A very popular idea, at least among taxpayers, is to expand the Free File program to higher income taxpayers. For 2009, filers with adjusted gross income of  $57,000 will be able to use the private-public partnership's free filing option.

But whether that nudge up the income ladder will help is unclear. Participation in the Free File program has been decreasing over the last few years. In 2009, Davis said, it suffered "a significant drop" in usage.

One explanation is that taxpayers eligible to use Free File this year instead chose other electronic options, such as personal software that, as noted earlier, included no-fee e-filing.

Develop IRS filing software
The IRS offered a new Free File option in 2009, the fillable forms. But the option still was offered by outside vendors, not directly by the tax agency.

The available forms also were generally basic ones and didn't include any software component, which meant the taxpayer had to have some tax expertise.

Although a relatively minuscule number of filers used the fillable forms this year, the option will continue in the 2010 filing season.

But rather than quiet the cry for a full-fledged IRS version of tax software, the ability to directly fill out and file IRS forms has caused many to renew their calls for an IRS equivalent of TurboTax or TaxCut.

The big problem here is cost. The bigger problem is providing sufficient and reliable customer support for such a program.

Also many (most) folks might be skeptical of an IRS created and operated software. "People would ask, 'Can we trust the IRS to give us all the deductions we get from TurboTax?'" said Davis.

Slow but steady
The bottom line is that the IRS will continue on its current electronic track, tweaking e-file options and working with tax preparers, software companies and via public outreach to get a few more of us to give up the tax paper route.

I would gladly electronically file federal returns for my clients if I could do so free of charge, without having to purchase expensive and flawed tax preparation software, and without having to give my fingerprints to the government as an ERO.

I currently file my NJ state tax returns electronically, when appropriate, as I am required by state law to do, using the state's NJWebFile system, which is available to all NJ full-year resident taxpayers free of charge on the NJ Division of Taxation website.

Did the IRS discuss this option at the Forum?