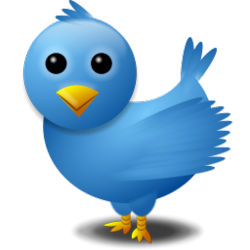 Welcome to our second .

As noted in the inaugural edition on Sept. 15, I gather tax info and comments from the popular social networking program Twitter. Then on the third Tuesday of each month, the Tweets become a blog post here at Don't Mess With Taxes.

If you tweet taxes, all you have to do is keep doing what you're doing. Based on how much time I waste spend networking on the site, I should run across your 140 character (or less) tax bon mots.

To make sure I do, you can "at" me; that is, include my Twitter ID @taxtweet in your Tweet, or if we follow each other on Twitter, you can send it to me via direct message there.

OK, enough already with the preliminaries. Let's get to Tax Twitter Tuesday!

@Stacies_TaxTips What Does An Accountant Really Do? Fave Rerun: By Stacie Clifford Kitts, CPA I’m not sure who Chloe Dowley is or.. http://bit.ly/3w714o

A couple Tweeple note the ever-present connection of crime and taxes. Insert your own IRS joke here.

@ThePayrollGuy A local CPA busted for filing a bookie's returns improperly. It's the taxes that get ya, not the illegal gambling?

@michellegolden Yup! Same reason "alternative" farmers make sure they pay their taxes too. We can prob thank Al Capone for these lessons.

Now back to the tax straight and narrow.

@Green_Panda Do you file your own taxes? Do you know the difference between a tax deduction &exemption? http://su.pr/2yHq1f Great comments @fcn

Pardon me for the shameless plug via one of our Tax Twitter Tuesday contributors:

As thanks for that promo Joe, I'll give you another Tweet:

@kevinfunnell "Fun" and "audit" go together like "fish" and "bicycle," eh? RT @retheauditors: This is as fun as it gets in PwC Audit http://bit.ly/1HDgQw

The tax pros and professionalism debate is still raging on Twitter, as evidenced by a couple of my Tweeple:

@bruce_taxguy A little Professionalism, if you please. New post - http://bit.ly/5ipT

To put to rest the charge that Twitter is lightweight, we have an interestding philosopical question:

@Darrin_Mish Updated my blog with Does the IRS play God? http://bit.ly/LsRgb

And while I try to spread the Tax Twitter Tuesday love around, as you noticed earlier, I made an exception. Here's another one.

I just gotta include a repeat offender Tweeter since he expresses a sentiment everyone's shared at some point:

If you do Tweet taxes, thanks! If I missed one of your pithy entries in this edition, sorry! But there's always next month.

We'll be back here on Nov. 17 with a whole lot of Twitter tax tidbits for which we all can be thankful. See you then -- and in between, too, I hope! -- here at the ol' blog and on Twitter.