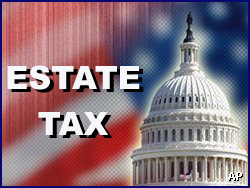 A bipartisan group of lawmakers say they have the plan to ease the estate tax burden.

Their Estate Tax Relief Act of 2009 (H.R. 3905) would lower the estate tax rate and increase, over the next 10 years, the amount of assets that would escape estate taxation.

As for the current 45 percent estate tax rate, that would drop to 35 percent.

While conventional wisdom is that the 2009 estate tax law -- the $3.5 million threshold and 45 percent rate -- will be continued in 2010 rather than letting the estate tax die, H.R. 3905 does have a bit of a legislative head start for those who want to tackle the issue on a more permanent basis.

The House proposal is based on an amendment to the Congressional budget offered earlier this year by Senators Blanche Lincoln (D-Ark.) and Jon Kyl (R-Ariz.). That measure, with the amendment, was OK'ed by the Senate in April.

Since the House and Senate proposals are very similar, it could make getting the changes through both bodies by year's end a bit easier.

Of course, "easier" and "Congress" are two words that are rarely used in the same sentence.

But look for lawmakers to do something since if they don't, after a one-year repeal, the estate tax would return in 2011, with estates of more than $1 million being taxed at a 55 percent rate.

Outside support: Lobbyists also, as usual, will come into play in any estate tax deliberations.

While most groups still want total, permanent repeal of the estate tax, some are lending tentative support to this latest measure.

One of those organizations is the National Federation of Independent Business (NFIB).

"NFIB is encouraged by the bipartisan support for H.R. 3905. Permanent repeal of the estate tax remains one of NFIB's top priorities, and H.R. 3905 moves us closer to that goal," said Susan Eckerly, NFIB senior vice president.

"We are pleased there is bipartisan support to do better than current law in the House and commend the sponsors of the bill for working to increase the exemption," said AFBF President Bob Stallman. The Federation wants an exemption increase to $10 million per person.