In 1492 Columbus sailed the ocean blue.

Apparently, that line is just the beginning of a whole Columbus discovers the New World song. Who knew? But it's a nice little Google discovery for today, the U.S. federal holiday honoring Christopher Columbus.

Three-day weekends haven't meant as much to me since I left D.C., birthplace of time off for federal employees. And now the Wall Street Journal tells us that Columbus Day is in danger of sailing off the calendar.

That would be too bad. Any event for which you can throw parade is fun. Yeah, I know; tax dollars spent to police the route and worker productivity lost. But c'mon! A parade!

And any event with a connection to Italy, the birthplace of Columbus, even though he accidentally sailed to America on behalf of Spain, is cool with me. I'm always looking for an excuse to have gelato and cannoli! 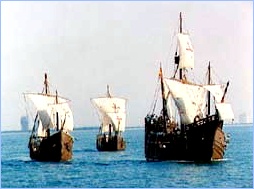 So today the ol' blog will commemorate Columbus Day with three tax breaks you might not have yet discovered in the American Recovery and Reinvestment Act (ARRA).

Why three? Because Chris set out on his spice route hunt with the Niña, the Pinta and the Santa Maria. Tax anchors aweigh!

Auto sales tax deduction
Thanks to ARRA, if you buy a new vehicle by the end of the year, you can deduct the state and local sales or excise taxes you pay on the purchase.

But the deduction is available regardless of whether you itemize your deductions.

And if you live in a state with no sales tax, you still can deduct certain other fees or taxes imposed by the state or local government that are associated with the purchase of your new vehicle.

Home energy efficiency credit
It was the hottest summer ever here in Central Texas, with 68 days of 100-degree-or-hotter temps, one shy of the all-time record! so close yet so hot and near. So I am very glad that the new air conditioner we had to buy -- and with those thermometer readings, "had to" is accurate -- will get us a $1,500 credit on our 2009 tax return.

A lesser credit had been reinstated for the 2009 tax year, but ARRA improved upon that tax break. Now the tax credit for homeowners who make energy efficient improvements to their existing homes is 30 percent of the cost of all qualifying home improvements up to a maximum credit of $1,500 for upgrades placed in service in 2009 and 2010.

If you really want to go energy improvement crazy, some more-costly upgrades, such as various solar, wind and geothermal systems, offer a credit of 30 percent of the purchase price with no cap. Tax credit for these more involved upgrades are available through 2016; just make sure you claim them for the tax year in which you purchased the upgrade.

For 2009 and 2010 tax years, the American Opportunity Credit modifies the Hope Credit, extending the potential for $2,500 in tax savings per student  to more taxpayers, including many with higher incomes. More expenses are covered under the credit and it can be claimed for four post-secondary education years instead of just two.

Also under the ARRA, computer technology is now on the list of approved college expenses that can be paid for by a 529 plan.

Well, I see land ho, so we're taking this tax vessel to port. But if you have the day off and want to spend it taking a longer tax voyage, check out the IRS' ARRA info center.