Bet on it, states are struggling

If you had any doubt that times are bad financially for states, further than what used to be a sure-fire money raiser: gambling.

A study by the Rockefeller Institute of Government, the public policy research arm of the State University of New York, found that gambling revenues collected by state and local governments dropped by 2.6 percent from fiscal year 2008 to 2009. This is the first time in more than 30 years that the state-sanctioned gambling cash has declined.

The report, For the First Time, a Smaller Jackpot, is definitely bad news for cash-strapped states that are hoping casinos, video-lottery terminals and other gambling operations can provide as potential new revenue. According to the Rockefeller Institute, more than 25 states considered new or added gambling proposals in the past year.

Precipitous revenue drop: The desperation of the states is underscored by another Rockefeller Institute study released last week that found for the second quarter in a row, state tax collections across the U.S. plummeted during April through June.

When compared to the same period a the nation's second-quarter 2009 tax revenues dropped a record .

Alaska suffered the worst, a 86.5 percent decline, due primarily to the recent drop in oil prices.

Vermont fared the best, recording a 2.2 percent growth in tax revenues. The state's increase was due mostly to a one-time estate-tax settlement. South Dakota suffered a drop-off of only 0.8 percent in the second quarter.

State revenue sources: So exactly where do states get (or try to collect) their operating funds in these trying times?

States with plentiful valuable natural resources, such as Alaska and Wyoming, tend to those tax revenue sources. The benefit here is that the states can do so without worrying too much about driving the activity out of state.

On the other hand, states with a more progressive tax code tend to rely heavily on individual income taxes.

Tax Foundation researchers used the data, to create "top ten" tables that highlight the states that rely heavily on each of four major categories: property taxes, individual income taxes, general and selective sales taxes and "licenses and other taxes."

New Hampshire tops the property tax list, with more than of its funds coming from that tax.

Various sales taxes account for more than 62 percent of the revenue collected by Washington state.

Alaska relies most heavily on licenses and other taxes, with almost 63 percent of its funds from those sources.

As for income taxes, Oregon tops that category. Just over of the Beaver State's revenue comes from individual income tax collections.

Stateline.org has taken the Tax Foundation data and put it into the comprehensive, and quite colorful, table shown below.

Sorting through sales tax rates: Texas has no state income tax. We depend primarily on property tax collections (which has been an ongoing political battle for what seems like forever).

But a fair amount of tax revenue in the Lone Star State also comes from sales taxes. I'm particularly aware of that here in Austin, where the combined state and local sales tax rate is almost a percentage point greater than the overall state average.

The Lone Star State's combined average state/local sales tax rate, however, is not quite big enough to crack the top 10, according to the Tax Foundation's latest look at state and local option sales tax rates.

Tennessee has the dubious honor of having the highest sales tax rate at 9.41 percent.

The handy, and also quite colorful, map below shows how the states compare when it comes to combined state and local sales tax rates. 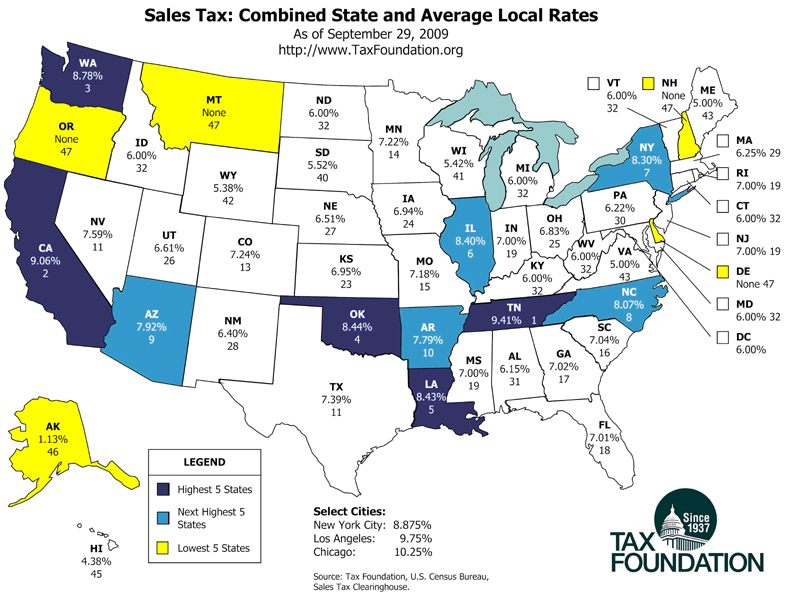 States with corporate and especially individual incomes taxes show a general trend, which is higher debt and prosperity.

Get the picture? Keep the governments hands out of the pockets of men, specifically their earnings! It's better for the individual and it's proven better for the state and society as well.

Love the state by state breakdown of individual taxes. I know we've had conversations like this before, but are the states really facing a problem of declining revenue streams or an inability to adjust to the changing economic climate (providing less services and spending less money)?