Trading Tweets with the tax man

The IRS is continuing to move into social media.

A couple of weeks ago, I blogged about the agency's YouTube video page.

Last week at the IRS Nationwide Tax Forum in Dallas, the IRS was continually touting its Twitter presence, @InternalRevenue. 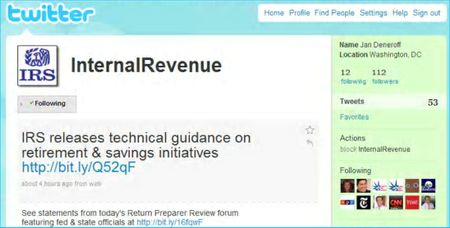 Will the IRS get personal and chatty as is the Web 2.0 way? Nah. But that's understandable.

While the agency and its employees would definitely like folks to think more positively about them (who doesn't?), that's not the IRS and IRS employee goal.

They've got to focus on getting out correct and timely information to the public. Twitter and YouTube and probably an eventual Facebook page are just more ways to do that. A good example was during a recent hearing on the soon-to-be-proposed tax preparer regulations, during which @InternalRevenue live Tweeted the session.

If you're a little skeptical about IRS proclamations, the agency's social media outlets probably won't change your mind. And with the 140 character limit and typically short video formats, you're only going to get a taste of tax news.

But you've got to give the IRS credit for taking this step. These new media options can serve as alerts and then I and my personal finance/tax blogging colleagues will do our best to put the info into context and readable language!