UPDATE, Tuesday, Sept. 22: The Senate Finance Committee
is marking up the Chairman's bill (discussed below) today.
Some possible major changes during today's hearing
are discussed in Senate health bill to get majopr surgery.

All the screaming and shouting and Kanye West-type rudeness of health care town hall meetings is over.

Now all the screaming and shouting and Joe Wilson-type rudeness moves back to Washington, D.C. 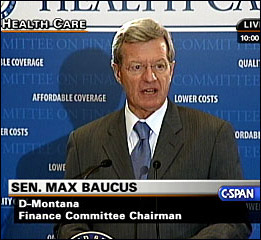 At a cost of $856 billion, Baucus' bill would require nearly all of us to carry health insurance and would prohibit insurance companies from denying coverage because of preexisting conditions.

And just how does Baucus propose we come up with $856 billion?

Part of the cost would come from folks who don't participate. Starting in 2013, America's Health Future Act would require nearly all of us to obtain coverage or face a penalty of up to $3,800 a year for families.

More money would be from "improving the quality and efficiency of health care."

Taxes for health care: And then there are the "revenue items."

In plain English, revenue items are taxes and fees.

My richer readers can relax. There is no surtax for the wealthy.

Neither is there a call for new sin taxes. That should more appropriately be new taxes on "sinful" activities, although if anyone could come up with new sins, it would be the folks on Capitol Hill. But I digress.

Baucus does, however, call for taxing some insurance coverage, as well as limiting flexible spending accounts and reducing -- I'm sorry, "modifying the definition of" -- medical expenses.

Timing consideration: One quick thought related to all this health care change talk. Some of the proposals will affect the millions of folks who do have employer-provided benefits.

So Congress needs to get on the stick and get this done ASAP since company benefits open seasons crank up this fall.

If any changes are made that affect those plans and what choices workers may have made, there needs to be provisions to allow workers to revisit their plan choices after open season if health care legislation changes the treatment of benefits and might have had an effect on what they chose.

OK. Now here's a look at some of Baucus proposals as they might affect individuals.

Medical care generally is defined broadly as amounts paid for "diagnoses, cure, mitigation, treatment or prevention of disease or for the purpose of affecting any structure of the body."

When it comes to what is covered, most employer-provided health policies generally follows the existing list of itemized deductions allowed for medical expenses.

But flexible spending accounts (FSAs), where you put in money pre-tax and then use it to pay for out-of-pocket expenses, deviate here. Under FSA rules, expenses for over-the-counter medications also are payable.

The Baucus plan would change that. The cost of over-the-counter medicine (other than doctor prescribed) would not be reimbursable on a tax-free basis through a medical FSA or other plans.

This change would take effect with the 2010 tax year. This is one of those instances where my concern about people having to make changes while health care changes are being debated.

Limit Flexible Spending Arrangements
Speaking of FSAs, 71 percent of companies that offer medical benefits offer these savings plans, according to a June 2009 survey by the Society for Human Resource Management.

As noted, FSAs enable workers to put a portion of their pay into the accounts before payroll taxes are computed. They then use the pre-tax money to pay for unreimbursed medical costs.

There is no statutory limit on medical FSAs, although the federal government caps the amount for its workers at $5,000 and many companies follow suit.

Baucus' bill would change that. FSA salary reductions by an employee would be limited to $2,000 a tax year.

The bill would not affect the similar dependent care FSA system, which is already limited to $5,000 per household per tax year. Some companies also offer adoption assistance flexible spending arrangements and those also would be unchanged.

The proposed changes to FSAs would begin with the 2013 tax year.

Increase Health Savings Account penalty
Currently, individuals with a high deductible health plan and usually no other coverage may set up and make tax-deductible contributions to a health savings account (HSA). This is a tax-exempt account whose monies can be used to pay for qualified medical expenses.

If the HSA money is used for non-medical expenses, the distribution must be counted as income and is taxable. Plus, an additional 10 percent tax is added for such ineligible HSA disbursements.

The Baucus bill would increase the additional tax to 20 percent of the improperly distributed amount.

The change would be effective beginning with the 2010 tax year.

Add an excise tax on high-cost insurance
Higher dollar health care plans are often referred to as Cadillac plans. Baucus wants a tax on insurers for the aggregate value coverage that exceeds a threshold amount for an employee.

Note that this excise tax would be on the insurer, not the employee. But let's get real. If this comes to pass, insurers would likely offer only lower-cost plans or would raise the employee premium portion for those plans that exceed the threshold.

You would know how much over the limit you were because your company would have to tell you the value of the health care benefit provided on your Form W-2.

Your boss also will probably tell you the value of the coverage when you ask for a raise and your employer notes how much you're already getting from company-provided benefits.

This provision, which naturally has some exclusions and transition rules, would begin with the 2013 tax year

Just the beginning: Those are just some of the high points I noticed in thumbing through the 220 page document.

Other revenue raiser items include, in part, employer health insurance and corporate information reporting requirements, new rules for nonprofit hospitals and annual fees on health insurance providers, as well as on the makers and importers of branded drugs and medical devices.

In addition to revenue items, the bill's other sections, or titles, also discuss:

Feel free to peruse the full Chairman's Mark yourself, or check out Baucus' announcement of the measure that hits some of its high points. I plan to read the bill more closely myself; I have some free time since the hubby is out of town for a few days.

And remember, although it's taken a while to get to this point, it's still just a beginning. Baucus' proposal must make it through the Senate. Then any health reform measure will have to be reconciled with proposals that originated in the House of Representatives.

So settle in, folks, and get out your earplugs if you're planning to watch any of the debate on C-SPAN.

The Democrats say we should have compassion and let the gov't insure those 46 Million Un-Insured.

Besides, I have to balance my cheekbook every month. Why does the Gov't insist on running a deficit.