I love it when taxes play a key part in my favorite movies. 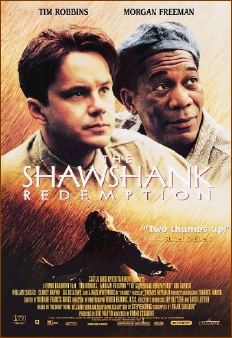 Take The Shawshank Redemption. I was watching it this afternoon for the 8,739th time. OK, a bit, but I've seen it a lot and with cable TV, "a lot" really does mean a lot.

Despite all the viewings, get a kick when Andy Dufresne's tax advice to a guard helps set in motion his ultimate plan.

In case you haven't seen the flick as many times as the scene comes about 40 minutes in when Andy, played by Tim Robbins, tells prison Capt. Hadley about the spousal gift tax exclusion (ostensibly in effect in the mid-1940s when the movie was set) as a way for the guard to hang onto his sizable inheritance.

Yep, tax issues sometimes are a way into jail. But in Andy's case, they were the first step to freedom.

Today, you can give up to $13,000 to anyone, family or non-relative, without any gift tax exclusions. That amount is usually adjusted each year for inflation, but since it's been so low in 2009, the limit will probably be the same in 2010.

And if you give a monetary gift to your spouse, there is no limit.

As for estates, right now any valued at up to $3.5 million will not be subject to the federal estate tax, which is 45 percent on estates worth more than that. But be sure to check with your state's revenue department; some still collect estate and inheritance taxes.

The federal estate tax is scheduled to expire on Jan. 1, 2010, but don't count on it. As I mentioned in Death and taxes will continue, before Congress closes down for the year, it will probably extend the 2009 estate tax provisions through 2010.

I saw this movie last night. This is one of the best movies i have ever watched in my life. It is just too brilliant.

I'm right there with you when Brooks makes his sad decision.

The Shawshank Redemption is my absolute favorite movie of all time. I've seen it so many times I've completely lost count and despite so many viewings I still cry every time I watch the scene with the old man. What a great movie!