The burden on the richest taxpayers

Analysis of the latest IRS data is not going to help sell a tax-the-rich approach to funding healthcare reform.

Thanks to the folks at the Tax Foundation for crunching the numbers that reveal the top 1 percent of taxpayers (in 2007, the latest complete info available) paid 40.4 percent of the total income taxes collected by the federal government.

"This is the highest percentage in modern history," notes Scott Hodge in the nonpartisan educational group's Tax Policy Blog. "By contrast, the top 1 percent paid 24.8 percent of the income tax burden in 1987, the year following the 1986 tax reform act."

Essentially, the share of the tax burden now borne by the top of taxpayers exceeds the share paid by the bottom of taxpayers combined. As the chart below shows, the bottom 95 percent paid 39.4 percent of the income 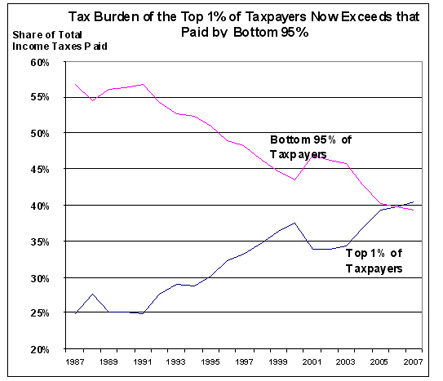 "Some in Washington say the tax system is still not progressive enough. However, the recent IRS data bolsters the findings of an OECD [Organization for Economic Co-operation and Development] study released last year showing that the U.S. -- not France or Sweden -- has the most progressive income tax system among OECD nations," writes Hodge. "We rely more heavily on the top 10 percent of taxpayers than does any nation and our poor people have the lowest tax burden of those in any nation.

"We are definitely overdue for some honesty in the debate over the progressivity of the nation's tax burden before lawmakers enact any new taxes to pay for expanded health care."

The Tax Foundation's Fiscal Fact 183 provides a summary of the latest federal individual income tax data, in both HTML and PDF format. The organization also has put together a series of charts containing IRS data on the taxes paid by individuals in different income groups.

I'd like to see a similar graph offering "share of total income", or better still a tax paid as a percent of total income (not marginal rate, but average tax)