Tempest in a tax teacup

I spend one Sunday at a friend's pool party and all tax hell breaks loose!

Yesterday, folks who've rallied at recent no-tax tea parties were at it again. While I was sitting by a pool, sipping cool beverages, they were watching the Sunday morning mostly political talk shows and subsequently working themselves into a full-fledged tax tizzy.

Apparently, they heard that any day now, Obama is going to break one of his key campaign promises; that is, he will raise taxes on middle-class Americans.

They know this tax hike is imminent because the Obama Administration's two top money men said so. Sort of. Or so some listeners (and political pundits and headline writers) think. Or they were told to think that by friends and/or other TV talking heads.

Not so fast folks.

Yes, Treasury Secretary Timothy Geithner and National Economic Council Director Lawrence Summers made yesterday's TV talk show rounds. But there are a couple of things about those appearances we need to keep in mind.

Geithner and Summers each talked about the subtle signs that the economy is improving. As it does indeed pick up some steam, they then said the Administration must start addressing the deficit the country has run up over the last few years, including not only debt the current Administration inherited, but also new debt incurred in connection with the most recent stimulus.

Isn't this what conservatives have been calling for, attention to the deficit? The devil, of course, is in the deficit-dealing details. And again, that's what Geithner and Summers essentially said.

A better headline to grab readers and viewers, however, is one like in today's New York Daily News: Econ chief Timothy Geithner won't rule out middle class tax increases.

What Geithner actually said, though, is that we, including the Administration, can't rule out anything. That's just called hedging your bets, a wise move anywhere, but particularity in Washington, D.C.

But I'll guarantee that the New York paper's tease got more readers than did CNN's more circumspect Geithner: Economy healing, but deficit must go down.

You heard, he said: Elaboration on deficit reduction is where Geithner, according to post-show reports, got in trouble, or more accurately, where some swear he said taxes will go up. 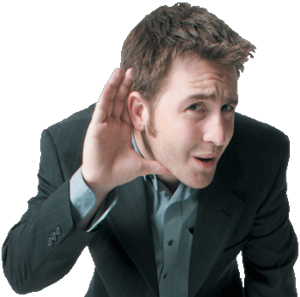 If you saw the exchange between the Treasury chief and ABC's George Stephanopoulos, or read the transcript, you know that the the words "middle class" were never uttered.

At one point, Stephanopoulos asked in general about revenue raising options to bring down the deficit.

Geithner replied, "Again, we're not at the point yet where we're going to make a judgment about what it's going to take." When pressed by the ABC program host, the Treasury Secretary said, "Well, I think that what the country needs to do is understand we're going to have to do what it takes. We're going to do what's necessary."

Anti-tax and anti-Obama folks, however, immediately heard "higher middle-class taxes." I think they need to see an audiologist ASAP.

Meanwhile, over on similar CBS and NBC programs, Summers was saying essentially the same thing: "There's a lot that could happen over time. It's never a good idea to absolutely rule things out no matter what."

So both Geithner and Summers say that when the economy is better our country's huge deficit must be addressed and that they, or whoever is in charge at that time, will address it then and evaluate what steps need to be taken.

Duh! Knock me down with a feather. Two high-ranking Washington-based guys actually spoke the truth.

But what they didn't say was that your, my and John Q. Public's taxes are going up.

I suggest you check out the great summary of yesterday's tax tempest at The Atlantic's Politics blog, where you'll find The Sunday Shows In Seven Sentences Or Less.

Who's in charge here? Which brings me to my second key point. Even if they had said individual middle-class income taxes are going up, which they didn't, so what?

While Geithner and Summers are key Obama players and make good wonk talk show guests, they are not politicians, as their honest comments demonstrate. And they certainly aren't in charge of the country.

So their advice, financially sound as it might be, is not necessarily what the Administration will do.

Let's face it. Good fiscal (and other policy) moves often get shot down for political expediency. That's especially true when it comes to crafting taxes.

So everyone take a deep, cleansing breath. Go about your business and wait for the next political spin cycle.

I'm not saying let Geithner or Summers or Obama off the hook. But don't let the anti-tax folks terrorize you either. And definitely make sure you get all the information before you work yourself into a tax panic.

UPDATE, Monday, 8/3/09, 6;15 p.m.: This afternoon the Obama Administration decided to put an end to all the reading between the lines and explicited reaffirmed that it would not seek middle-class tax hikes. Read the details at CNN, Los Angeles Times, Fox News, Politics Daily and The Washington Post.

The Obama administration came out and said that they will adhere to their campaign promise of not raising taxes on the middle class.

Until he actually raises, I suggest you all try to keep it together.

I think the reason there is this huge explosion was the 400 times Obama said - "if you make under $250,000 you will NOT see one more dollar taxed."

I won't get into - what is middle class? But the moment ANY president breaks such a clear and direct promise the media JUMPS on it (as they should). I might have been 8 when it occurred, but I remember "READ MY LIPS NO NEW TAXES" and look what happened when there were new taxes.

Watch this blog for funny cartoons on Business, economy and go to market strategies: http://www.gotomarketblog.blogspot.com/