Schedule M, yet another new form

The tax alphabet is sure filling up. Earlier this month, I blogged about the new Schedule L that some taxpayers will have to file with their 2009 returns next year.

Let me now introduce you to Schedule M.

As the Schedule M snippet above indicates, it's related to the Making Work Pay credit that was part of the American Recovery and Reinvestment Act. Under that bill, popularly known as the February 2009 stimulus package, working taxpayers could get up to a $400 benefit. In addition, the stimulus package provided a special $250 payout to many retirees.

Now comes the fun part. When filing season rolls around next year, all of us who got some added cash from the credit get to account for our minimal windfall on this new form.

Not as easy as advertised: When the Marking Work Pay credit was announced earlier this year, it sounded easy enough. The credit amount would be distributed automatically to workers via a change in payroll withholding tables.

All you had to do was earn your pay and voila, your withholding would be adjusted to make sure a smaller portion of your pay went toward your federal taxes. You'd see the credit benefit as a slightly larger amount of take-home pay in each paycheck.

That did happen for most folks. But not all.

Self-employed folks have no payroll withholding taken out of their earnings. So if these folks didn't adjust their quarterly estimated tax payments to reflect the credit, they didn't get an extra dime this year. They'll need the Schedule M to compute the credit amount they can claim.

And even more problematic, folks like those I discussed in Making Work Pay payroll considerations will get too much of a credit this year. Schedule M will sort out that overpayment.

But it won't be easy, espeically if you do the work by hand instread of using tax software. The Schedule M worksheet that's included in the form's instructions looks to be even more intimidating that the Schedule M itself.

And even folks who file the easiest return, the 1040EZ, won't be off the hook. While those folks won't have to file a separate form, they will have to complete a worksheet on the back of the simplest of 1040s.

Make sure you report it: Think you can ignore this form because you already collected your Making Work Pay $400 credit though payroll withholding and made less than the phaseout amount ($75,000 in adjusted gross income for single taxpayers, $150,000 for couples filing jointly)? 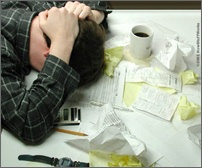 You'll need to file Schedule M (or complete the 1040EZ worksheet) or your appropriate Making Work Pay credit amount won't be reflected on your filing.

The correct credit amount, arrived at via the worksheets and/or Schedule M, is reported in the "payments" section of your return, along with, among other things, the amount of income taxes you had withheld or paid via estimated filings.

If you don't include the Making Work Pay credit amount, you essentially give back the eligible credit money that you received in 2009.

And if you got more than you should have, the smaller amount you can claim on your 2009 return will be reflected there.

As the instructions for this new schedule (and other tax forms) are finalized and the filing season gets closer, I'll revisit this and other new 2009 tax forms. I know all y'all are as excited about that prospect as I am!

Yep, the 2010 tax filing season is going to be another wild one for tax preparers, tax software companies, the IRS and, most importantly, we taxpayers.

Part of the 2009 stimulus package was President Barack Obama's Making Work Pay tax credit, or Schedule M, which adjusted federal withholding tables to increase take-home pay by up to $400 for working individuals and up to $800 for working married couples.

G Hunt,
Are/were you expecting a refund? Did you get it yet? Was it what you expected? If so, I'd run my tax numbers again using the Schedule M and see if there's a change; if there is, then file an amended return, Form 1040X. Or the IRS might file the Schedule M for you; in that case your refund likely will be larger than your expected. So if a larger check shows up, that's probably why and you don't have to do anything.

I filed my taxes manually but failed to notice the Schedule M requirement. Now what do I do?

Gendo is right that tax law gets changed every year, adding to the confusion. I always start working on my tax return by going straight to the "What's New" page of the instruction booklet. This avoids a lot of problems. I still almost missed Schedule M though, because it just doesn't look like the type of credit I could normally take.

I do have to correct one thing. The rich are NOT against flat taxes as they would benefit tremendously [except for the tiny percentage that manage to pay little or no taxes]. A flat tax, while easier at tax time, is regressive and is more of a burden to poor, middle and working class taxpayers. Right Kay?

Judy, the $250 went to recipients of Social Security, Veterans'and Railroad Board benefits, so just getting other pension money would not qualify a taxpayer. I suspect you are correct; your earned income was sufficient to earn you a portion of the Making Work Pay credit, which could be, but isn't guaranteed to be, up to $400 per worker. Kay

I live in the state of WA but get teachers' retirement pay from CA (NOT social security). My husband received the $250 refund last spring since he's on social security. I did not. My CPA filled out schedule M when doing our taxes, giving me the $250 credit. The IRS rejected the claim, but a phone call to IRS corrected that problem and I will receive a refund after all. Now a friend of mine here who also receives STRS income and NOT social security was told by her CPA that she's not entitled to the $250 claim (which her husband got through social security). Would the fact that I made a little extra money substituting last year while she had no income make any difference? We're both the same age. I believe we are both entitled to the $250 credit through schedule M, aren't we?

Ok, it's tax time and I have filed my taxes through TurboTax 7 times now becase the IRS is rejecting my Schedule M I have fixed per their request each time and I get a rejection notice around 6 hour later. I changed it to show I did and my husband didn't he passed on 31 Jan 09. I am at my wits end, I need my refunde being a widow with 2 kids. I hope it goes throu this time. Can I get help with with?

Cindy, you're right. It wasn't there last year. It's a new form to account for the Making Work Pay credit money that you got in your paycheck from reduced withholding last year. The amount wasn't much per paycheck; just around $7 to $10 so that's why you probably don't remember getting it. Everyone has to fill out this form, so it's good you did. Kay

I don't understand this schedule at all. I completed my taxes online yesterday and sent them off. Scehedule M was compelted online but I don't know if it should of been. After comparing last year and this year's taxes later on at home, I saw that this area was not there last year. I do not have a business and don't remember getting addtl. money back last year. Did I fill the 1040A out wrong this year?

Yes its a bit of a headache, but don't forget its a tax break. Don't have much sympathy for those who complain about keeping more of their money this year. It seems easy enough for me being self-employed, but not sure about my wife's situation. Thanks for the heads up.

Thaks for explaining Schedule M. You made it clear and understandable. A lot of people are going to miss this credit if they do their own taxes I'll bet.

Every year, we're going to give the U.S. people a test. Except we change the rules every year. And if you get any questions wrong it costs you money.

Ah, taxes... trillions overpaid due to confusing rules which the government keeps happily, but god forbid you make a mistake in your own favor- you'll be fined and penalized ten times over... with interest.

And the rich keep arguing against "flat taxes" and simplified forms (that prevent hiding income through numerous loopholes) because it is "unfair to the poor!" Right.

PatriotCat says - Can we has revolution tiem now?

is any body else sick of all this confusion? i bet the pharmicutical companies are getting rich at tax time. what with all the headaches everyone gets trying to fiqure it all out!