The most populous county in Alabama is in huge financial trouble, in large part because of its reliance on money from a tax that was repealed a decade ago. 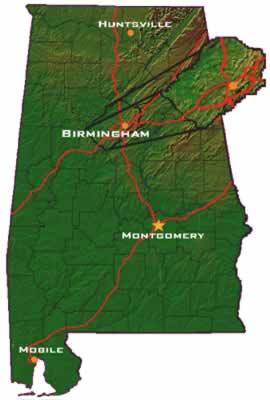 "Outside of the city of Detroit, it's fair to say we haven't seen any place in America with the severity of problems that they’re experiencing in Jefferson County," said Robert A. Kurrter, a managing director with Moody's Investors Service, in a story in today's New York Times.

Kurrter's employer has given the county, home of Birmingham and the state's recognized economic engine, a credit rating lower than any other municipality in the country.

Part of the county's financial troubles can be traced to a sewer project that was riddled with corruption.

But making matters worse for Jefferson County is that it was relying heavily on an officially nonexistent tax for much of its operational money.

In January a court ruled that a tax the county relied on for more than a quarter of its general fund was illegal because the state legislature repealed it in 1999.

That's right. A tax that was taken off the books 10 years ago was being used to keep the county and its services going.

According to the Times:

The tax that was ruled illegal, known as the occupational tax, is essentially a 0.5 percent tax on income, but the phrase "income tax" does not sit well with Alabamians. One of its peculiarities is that it exempts a long list of professionals like doctors and lawyers, as well as phrenologists, circus managers and crystal gazers. In 1999, state lawmakers from Jefferson County, who are allowed by legislative tradition to control the county’s ability to levy taxes, tried to earmark part of the money for their own projects, and the county balked.

In response, the lawmakers voted to repeal the tax. But the county, buoyed by court rulings in its favor, continued to collect it, bringing in about $75 million last year — more than 25 percent of the county's general fund.

In January, a judge ruled that the repeal was valid. Hoping lawmakers would fix the problem, the judge allowed the county to continue to use the tax until the end of the legislative session. But the Legislature did nothing.

And state lawmakers still are fighting over whether to reinstate the tax.

Meanwhile, Jefferson County has started making drastic cuts to services and personnel. As many as 1,200 county employees could be placed on leave for as long as six weeks.

Neighboring counties also are watching developments closely, since resolution of the now-dead tax could affect residents in those areas, too.