In addition to all of today's more important and meaningful celebrations, July 4th also has a special place in the hearts of racing fans.

It's the weekend when NASCAR runs the Firecracker 400, as it was originally dubbed before we had sporting event naming rights, at Daytona International Speedway. The old-time moniker still fits, especially since the cars now run at night, when any on-track pyrotechnics are even brighter. 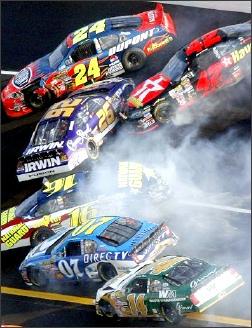 And you know there will be some. The July event is one of four restrictor plate races. More often than not, the two plate races at Daytona and the two at Talladega involve "the big one."

Such mangled machinery is the topic of my July racing column for Randall Reilly publications. In "Wrecking Isn't Racing," I have two words for the so-called "fans" who watch NASCAR just to see crunched sheet metal:  Go Away!

OK, I have more than two words on the subject. You can check them all out in the digital version of my Views from the Grandstands column in the July Truckers News magazine.

I also said the same thing as my alter ego Crazy Woman Driver in the publisher's Changing Lanes magazine. I have a copy of my Crazy incarnation in print, but it's not yet posted digitally; when it is, I'll come back and add the link.

UPDATE: As promised, here's the crazy version of the column.

You can check out all my racing rants and raves via the links provided in Crazy Woman Driver takes a Sunday Drive.

North Carolina, NASCAR and taxes: Most NASCAR teams are based in North Carolina and one of the sports' premier tracks is Charlotte (OK, Lowe's) Motor Speedway.

So you know things must be tough if the words "NASCAR" and "tax increase" are being uttered by legislators in the same sentence.

Some lawmakers are proposing more than $900 million in new taxes as a way to bridge North Carolina's budget shortfall. Among the suggestions is adding sales tax to 55 services and amusements that right now are not taxed, including bowling, golf and even NASCAR tickets.

Whether that will happen remains to be seen. Although the Tar Heel State's new fiscal year began July 1, lawmakers recessed for the July 4th holiday after passing a stopgap plan to fund state government operations through July 15.

It is fun to watch though! No doubt about it.

Um, I cant believe those thinggs aren't taxed yet! Impose the tax, the nascar tickets are expensive and they sell a ton of them.

Classic exposition, I have also mentioned it in my blog article. But it is a pity that almost no friend discussed it with me. I am very happy to see your article.