Congress has been pretty busy of late, what with energy legislation and the debate on health care. But National Taxpayer Advocate Nina E. Olson has added a few more things to Congress' to-do list.

As the Taxpayer Advocate Service enters its 10th year, Olson writes in her midyear report that both her office and the IRS "face a difficult environment for achieving what is, in essence, the same mission -- ensuring that the IRS treats taxpayers fairly and identifying ways to increase voluntary compliance while addressing noncompliance."

In addition, she notes that tax collection at a time when "increasing numbers of taxpayers have difficulty paying their daily living expenses" is a major challenge. As for specific areas Olson believes deserve special Congressional emphasis in fiscal year 2010, which begins Oct. 1, she cites four:

1. Taxpayer Services.
The report notes that the IRS, at the urging of House and Senate Appropriations Committees in 2006, has created a five-year strategic plan for taxpayer service known as the Taxpayer Assistance Blueprint. Olson, however, is concerned that the momentum to implement and refine the Blueprint's recommendations has stalled.

The perennial problem of IRS telephone service to taxpayers also falls into this category. The service level peaked at in fiscal year 2004 and remained at a relatively high level, hitting 82 percent as recently as fiscal year 2007, notes Olson. But it plummeted to 53 percent in fiscal 2008, and the IRS has reduced its target goal for fiscal 2010 to just over 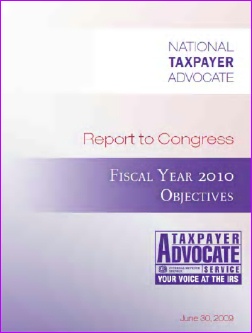 2. Oversight of Tax Return Preparers.
Tax return preparers complete about 62 percent of all individual income tax returns and therefore play a critical role in facilitating tax compliance, writes Olson. However, research indicates that a high percentage of preparers make mistakes on 1040s, fail to perform sufficient due diligence and even take positions that they know are not supportable.

In each of these cases, says Olson, taxpayers usually don't pay their proper tax amounts, resulting in less federal revenue and potentially subjecting taxpayers to subsequent penalties and interest when the mistakes are caught.

In the report, Olson reiterates her longstanding recommendation that the government regulate unenrolled federal tax return preparers, including by requiring initial testing and continuing professional education. The IRS began exploring such options earlier this year.

3. Offers in Compromise.
For the past nine years, the Advocate has expressed concern about the effectiveness of the IRS’ offer in compromise program, writes Olson. The program is designed to allow financially struggling taxpayers to pay what they can afford and make a fresh start.

Olson believes, however, that the IRS requires taxpayers to provide too much information with the initial application. That tends to deter taxpayers who could benefit from the program from applying.

4. Refundable Tax Credits.
These tax credits provide eligible taxpayers with money back even if they own no taxes. The American Recovery and Reinvestment Act of 2009, aka the stimulus bill, temporarily increased the refundable portions of the Earned Income Tax Credit (EITC) and the child tax credit. It also created some new refundable credits, including the Making Work Pay credit and American Opportunity education tax credit.

Refundable credits may present an increased risk of fraud. This means the IRS must "perform a delicate balancing act," says Olson.

"On the one hand, if the IRS does not do enough to detect and prevent fraud, it may pay out billions of dollars as a result of false and fraudulent claims," she tells Congress. "On the other hand, if the IRS clamps down too tightly, hundreds of thousands and potentially millions of predominantly low income taxpayers will not receive timely refunds."

Olson says her office plans to study this and other issues the IRS faces in effectively administering refundable tax credits.

You can read more about these tax concerns, as well as many others, in the Taxpayer Advocate's full 131-page report, FY 2010 Objectives Report to Congress.