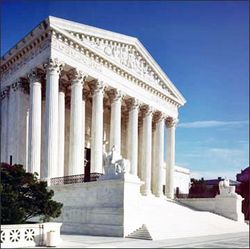 So now, Sonia Sotomayor waits to see if she'll be taking a seat on the country's highest court.

Her U.S. Supreme Court confirmation hearings are over, but the verdict from the Senate Judiciary Committee has been put on hold by the panel's leading Republican until July 28.

Don't ask me to explain the arcane rules that allow such procedural delays. It's the Senate and I'm just finishing up my first cup of coffee. Suffice it say that the judge who hopes to become the first Latina on the Supreme Court has to wait a bit longer for that to become official.

And despite the Republican dallying, that's going to happen eventually.

In the meantime, it gives tax geeks more time to root around for revenue-related rulings from Sotomayor. As I posted a couple of weeks ago, there aren't that many.

But leave it to the crack staff at The Tax Foundation to find a bit more. The Washington, D.C.-based nonpartisan educational organization has issued a report that reviews a couple of Sotomayor's past opinions as an indicator of how she may handle similar cases in the future.

In "Past Sotomayor Opinions Not Encouraging for Opponents of State Tax Overreaching," Joseph Henchman, Tax Counsel and Director of State Projects, and Law Clerk Travis Greaves examine two cases handed down during Judge Sotomayor's time on the Second Circuit that appear to provide insight as to how she may handle important tax questions.

Government 2, taxpayers 0: In both Swedenburg v. Kelly and William L. Rudkin Testamentary Trust v. Commissioner of Internal Revenue, the Tax Foundation's experts say that Sotomayor's reading of the tax code, when it fills in ambiguous or unclear areas, may be harsher on taxpayers and more favorable to the government.

The report's authors also note that one issue the Supreme Court needs to resolve is the recent trend of aggressive actions by states to tax beyond their borders, evidenced in recent efforts by states to collect taxes from out-of-state Internet retailers, aka Amazon taxes.

In these situations, several states have asserted the right to collect sales taxes if the parent company has relationships with in-state affiliates. In turn, the companies have responded by terminating the affiliate relationships. The constitutionality of these "substantial nexus" taxes -- meaning the taxed entity has no property or employees in the state levying the tax -- continues to be fought in courts.

Tax Foundation research shows while Sotomayor has not ruled on a nexus case, she has had experience ruling in cases dealing with the part of the Constitution governing such cases: the Commerce Clause of Article I, Section 8.

That was tax code section at issue in the Swedenburg case, which dealt with direct winery-to-consumer sales. Sotomayor upheld a New York law prohibiting out-of-state wineries from selling in the state. The Tax Foundation reports that:

"Judge Sotomayor was part of a three-judge panel finding New York's discriminatory position toward out-of-state wine shippers to be constitutional, affirming the trial court ruling. Forced to reconcile the Commerce Clause with the 21st Amendment, the court's opinion picked a state protectionist scheme disguised as a liquor regulation as more deserving of judicial protection than Ms. Swedenburg's right to ship legal goods across state lines. While it acknowledged the state's desire to keep tax revenue, the Court found that the possible positives that could come out of restricting the interstate shipment of liquor (particularly hindering the shipment of alcohol to underage minors) outweighed the real negatives to out-of-state wineries."

The Swedenburg case, whose lower-court ruling was eventually reversed by the Supreme Court, is important for tax jurisprudence, says the Tax Foundation, because more and more states are implementing discriminatory or expansive taxes that appear to be in violation of the Commerce Clause.

In the spirit of full disclosure, the Tax Foundation's report notes that its Center for Legal Reform has filed friend-of-the-court briefs and written reports about many of these cases, "where overreaching by state tax authorities to advance a protectionist motive have hurt business and consumers."

You can read more on Sotomayor's Swedenburg ruling, as well her decision in a trust's case again the IRS, in the Tax Foundation's full report, Fiscal Fact No. 179.

Your mileage may vary: Of course, the Tax Foundation wisely notes that a Supreme Court nominee's prior voting record or political affiliation does not always guarantee how ne or she will decide cases as a Supreme Court justice.

A similar Tax Foundation analysis of rulings by retiring Justice David Souter, whom Sotomayor will replace, found that Souter has shifted from questioning states' protectionist use of their taxing authority to a willingness to twist precedents to uphold such laws.

"Over the course of his 19 years on the Supreme Court, Justice Souter has been accused of transforming from a moderate 'conservative' to a reliable 'liberal' vote," the Tax Foundation notes. "Insofar as his views on discriminatory taxes go, there has been a shift. A justice who was once eager to question states' protectionist use of their taxing authority (to the detriment of the national market) has become over time a justice willing to twist the precedents to uphold such laws."

But the two Sotomayor tax cases reviewed in this latest Tax Foundation study are all we've got right now. And the report's authors are not overstepping when they note that the rulings may provide some insight into the next Supreme Court Justice's future judicial performance.