While there's still plenty of political sparring going on in Washington, lawmakers on both sides of Capitol Hill apparently can agree on one thing: The IRS needs more money to help it bring in more money. 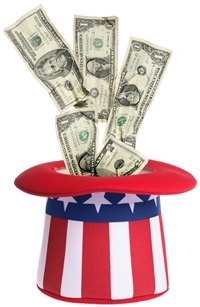 The appropriations committees in both the Senate and House this week signed off on a fiscal 2010 budget of $12.15 billion for the IRS.

The House and Senate revenue panels also agreed that the IRS should get $5.5 billion this coming fiscal year to help it enforce our tax laws. That's a $387 million increase from last fiscal year's amount.

House Appropriations Committee Chairman David R. Obey (D-Wis.) noted in the bill's summary that "among other things, the increase is for the administration's initiative to target wealthy individuals and businesses who avoid U.S. taxes by parking money in overseas tax havens."

There are some slight differences in the bills, particularly in connection with the amount of money that would go toward the IRS' business modernization effort. This is a project that the IRS Oversight Board, a nine-member independent body charged to oversee the tax agency, says should be fully funded.

The modernization money, however, shouldn't be a big budget hurdle for House and Senate conferees to overcome. Congress is expected to reconcile the two funding bills before it takes its August recess

Just thought you should know about the added cash for tax examinations (that's the IRS' nicer word for audit) in case you were thinking about pushing the filing envelope a bit.