I sneaked out of my office for a couple of hours today to catch Public Enemies. I enjoyed it, but then I'm a big fan of Johnny Depp, Michael Mann and old-time gangster tales.

Today's financial climate couldn't be more perfect for the movie.

John Dillinger and his gang were robbing banks in the early '30s, a time when financial institutions were failing, taking people's life savings down with them. To many, Dillinger was a folk hero. That's alluded to in a scene where Depp's Dillinger tells a bank employee to take his few dollars back; the robber only wants the bank's money.

Flash forward to today's anger at failing banks and criminal money managers and you have life and art repeatedly imitating each other.

But the tales of Dillinger and Capone had decidedly different endings.

FBI agents shot down Dillinger outside a Chicago movie theater.

The tax code is still a powerful weapon when it comes to catching criminals, even those whose illegal acts aren't of the fiscal nature.

Many states require drug dealers to purchase tax stamps or face consequences. And now it looks like illegal downloaders could be in the tax man's cross hairs.

At least tax-related arrests are usually a lot less messy.

Depression-era fiscal and tax policy: Over at Marginal Revolution, Alex Tabarrok takes a look at fiscal policy during the Great Depression.

Tabarrok wrote the piece in November 2008, right after the financial services bailout bill had been enacted. In the wake of February's stimulus package, his look at government spending policies of the 1930s remains of interest.

Of note is his finding that 75 or so years ago, federal expenditures increased tremendously, but so did taxes.

That combination was why the federal spending back then didn't work. It wasn't that an influx of government money wasn't tried, Tabarrok writes, but that taxes were also raised to prohibitive levels.

How prohibitive? Check out this chart: 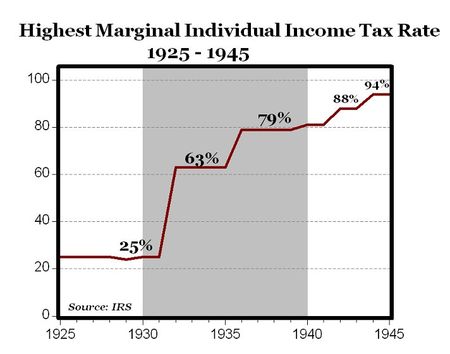