Bernard Madoff is heading to jail for the rest of his life. 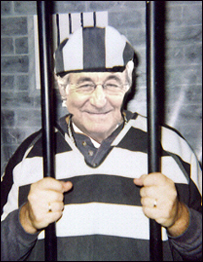 And the victims of the largest-ever Ponzi scheme got some measure of vengeance from the 150-year prison sentence handed down for the faux financier yesterday.

But what about their money?

There's all sorts of wrangling going on over who owes whom what and how to get it. Before all's said and done, this process likely will join the ranks of the longest legal battles.

One of the targets is the Securities and Exchange Commission (SEC).

As Joe Nocera notes in his his New York Times blog Executive Suite, some victims of Madoff’s Ponzi scheme are suing the SEC. Apparently the legal theory, says Nocera, is that the agency's negligence in failing to catch the now-famous crook means that it should be legally liable for the victims' losses.

I have to agree with Nocera when he says no way. Or, as he puts it so well:

"Government agencies make mistakes, treat people unfairly, and do all sorts of things we all wish they wouldn’t. But by law, the federal government cannot be sued when it carries out an unjust prosecution or, for that matter, when it fails to uncover a giant fraud. Government negligence led pretty directly to the recent financial crisis. Does that mean the feds should be reimbursing us for our stock market losses? Of course not. Because it’s not really the S.E.C. that would be paying out the money — it would be the taxpayers."

While I support government involvement in some extreme economic and fiscal situations -- and please, before you fire off your e-mail castigating me for being a tax-and-spend Socialist, note the words "some" and "extreme" and set your flame thrower accordingly -- I definitely understand, and am feeling it a bit myself, the effects of bailout burnout.

Tax help for scheme victims: Plus, Bernie Madoff victims, as well as other folks who've fallen prey to fraudulent schemes, already might be able to get some help from Uncle Sam. I'm talking, of course, specifically about the IRS.

When the magnitude of the Madoff scheme was coming to light earlier this year, the IRS issued a couple of guidance items to help taxpayers who are victims of losses from Ponzi-type investment scams.

The first, Revenue Ruling 2009-09, clarifies the tax law governing the treatment of losses in such schemes.

The second piece of IRS guidance is Revenue Procedure 2009-20  that provides a safe-harbor method of computing and reporting the losses.

"The revenue ruling is important because determining the amount and timing of losses from these schemes is factually difficult and dependent on the prospect of recovering the lost money (which may not become known for several years)," noted IRS Commissioner Doug Shulman at a Senate Finance Committee hearing back in March. "In addition, it clarifies the reach of older guidance on these losses that is somewhat obsolete."

As for the revenue procedure, Shulman noted that it "simplifies compliance for taxpayers (and administration for the IRS) by providing a safe-harbor means of determining the year in which the loss is deemed to occur and a simplified means of computing the amount of the loss."

Of course, what Shulman considers simple is usually not what you and I think of as easy. So if you've been the victim of a scheme, check with a tax professional as to whether the IRS proclamations affect you and if so, just how and how much the tax guidance might help you.

And be happy that there's at least the possibility that via your tax filing you might be able to alleviate a bit of your financial loss, if not your anger about being taken in in the first place.

Read more about it: In addition to Nocera's item, The Atlantic (courtesy of Congress Daily information) looks at Capitol Hill interest in a legislative fix for Madoff victims and Andy Ostroy reminds us of The Lesson to be Learned from Bernie Madoff.

I wish IRS would raise deduction on losses in stock market! At $3,000 a year, I'd have to live another 30 yrs to take full advantage of losses-and not just from the current stock market free fall. My losses stem back to the dotcom bust!

I think the lesson here is that we must take charge of our personal finances and don't rely on other people. If in case you don't know some bits of it, ask help from a reliable personal finance adviser and work side by side.

Its been a while since law school, but if I remember correctly you can't sue a gov't agency in cases such as this unless the agency gave you a reliance that the specific claim should not have been worried about.

Example:
Can't sue police because your spouse got killed by robber

Not sure how this applies to Madoff since it was continiously warned about what he may be doing.

Great post. I agree with you that Madoff's victims shouldn't be compensated by the SEC. It was their duty to do the necessary due diligence, and they didn't complain when they were getting outrageous returns whether the market was doing well or not. For my view on the how much resposibility the victims share in their own losses, take a look at http://ontheroadto1m.wordpress.com/2009/06/29/about-bernard-madoffs-victims/