The United States Tax Court is one way for taxpayers to dispute an IRS decision. In addition to ruling on amounts that the IRS says are due, the Court also has jurisdiction to, among other things, make certain types of declaratory judgments, order abatement of interest charges and award administrative and litigation costs.

While the Tax Court isn't the starting point for most tax disagreements, sometimes it does become the best ultimate avenue for tax issue resolution.

Unfortunately, it combines the two things that tend to give most of us our worst nightmares: taxes and the legal system. Both are complex and intimidating. But the Tax Court itself is working to take some of the fear out of its processes.

For taxpayers who find that the Tax Court is indeed the appropriate venue for dealing with an IRS dispute, the Court has created eight brief online videos. The presentations, designed for taxpayers who want to represent themselves, provide information, not legal advice, to help them know what to expect. They include: 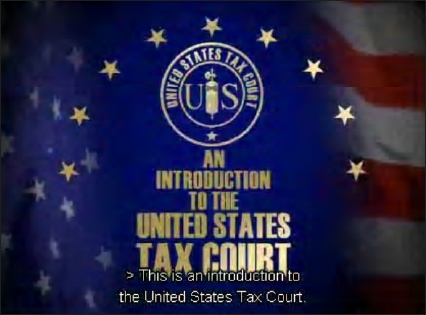 Since the program is divided into separate videos, you're not restricted to A-to-B-to-C access. You can skip  around and pick and choose the segments that are of most, or more immediate, interest to you.

In addition to the videos, the Tax Court's Web site has information about the Court, its judges, filing and court fees and a comprehensive section that deals with some of taxpayers' most frequent questions.

While it's good to have as much guidance as possible about Tax Court, that option is usually a final one.

Before then, you have several other ways to deal with tax disputes.

Open a tax dialog: Start by talking to the IRS. Yes, in some cases, the agency is willing to negotiate tax bills. You can set up installment payments that will help you pay what you can incrementally. Offer in compromise allow you and Uncle Sam to agree on a smaller amount of taxes that you owe.

And during these tough economic times, the IRS has had a change of heart. It says it is clearing tax liens more quickly, as well as working out payment plans with financially struggling taxpayers who don't have a lot of cash to spread around among the IRS and their other creditors. Just last month, a tax pro from Iowa told me that one of his clients is the beneficiary of this new, more compassionate IRS attitude. And, yes, he was surprised.

The key here is to discuss your tax bill with the IRS. They can't make any accommodations for you unless you let them know what you want and need.

Get an Advocate: If you've gone through all the IRS channels and are still not happy with the results, you might be able to get some help from the Taxpayer Advocate Service. This is an independent office within the IRS that assists taxpayers who are encountering hardship from a tax ruling. There's at least one Taxpayer Advocate Service office in each state. You can find the one nearest you at the Advocate's online locator.

If those avenues don't work to your liking, then you can review the Tax Court videos and Web site info and then argue your case before those judges.