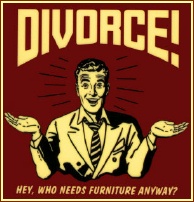 I must admit that I've never seen the television show starring Jon and Kate and their brood. I'm not a fan of reality, or quasi-reality as is usually the case, shows.

And being childless, I don't have anything in common, thank goodness, with a family coping with eight kids.

I've also been happily married (and I think the hubby has been, too) for many more years than Jon and Kate. But there's no way anyone can escape the news of the Gosselin's crumbling marriage.

So it seems as good a time as any to offer some tax tips, eight to be exact in keeping with the show's title, to folks who are severing their marital ties.

1. Decide who will get the children's tax exemptions.
This definitely is a tax concern that Jon and Kate and lots of splitting parents must deal with at tax time. An article posted at Divorce 360 notes that this can be a sticking point with many divorcing couples. One approach is to make the exemption contingent on custody payments. If  the person paying child support makes all payments in full and on time throughout the year, allow that parent to take the exemptions.

2. Use the correct filing status.
You might be suddenly single again, but a more tax advantageous filing status is head of household. It offers, in part, a larger standard deduction amount. But only the parent who has physical custody of the child for more than half the tax year, and who provided more than half of the costs of the household's upkeep, is eligible to file this way.

3. Consider filing separately while still legally married.
If the breakup drags on, you could find yourself still married in the eyes of the IRS but leading separate lives for all intents and purposes. In this case, you might want to consider sending in two individual 1040s using the married filing separately status. In this case, each soon-to-be-ex-spouse will report only his or her income, exemptions, credits and deductions.

Be careful though, notes iVillage, if you live in a community property state -- Arizona, California, Idaho, Louisiana, Nevada, New Mexico, Texas, Washington and Wisconsin. In these jurisdictions you most likely will have to report half of the "community income" and claim one-half of the "community deductions."

4. Know the rules regarding tax breaks for kids.
Jon and Kate are about to discover that kids and taxes get even more complicated with a marital dissolution. DivorceSource.com points out that several tax benefits connected to your child depend upon not only who gets to claim the youngster's dependency exemption, but also upon a parent's residential status of the spouse.

These include, but are not limited to, the child and dependent care credit, the child tax credit, education credits and the Earned Income Tax Credit, or EITC.

The Wandering Tax Pro offers a more detailed look at how divorce affects the claiming of educational tax credits. And the post underscores the importance of discussing with your attorney and tax adviser how child-related tax breaks might be affected and whether some other form of compensation should be made to the spouse who is unable to utilize the tax benefits.

5. Don't automatically take the house.
A couple's residence is most often their most expensive jointly-owned asset. When they divorce, the ex-wife usually wants to keep the house so the kids, who typically live with her, can continue to live in the place where they've grown up and stay close to their friends and school. But that might not be the best tax-saving move.

Divorcing couples can sell the home before the final decree is issued and divide the potential $500,000 tax-excluded profit. If the spouse that ends up as sole owner of the property decides to sell it later, his or her allowable tax-free net profit will be just $250,000.

6. Time your breakup.
In a situation as emotional as ending a marriage, tax timing is probably not going to be a major consideration. But it could hurt or help you. Remember that your filing status is determined by your marital status on the last day of the year.

If you're still legally married on Dec. 31, you have the option of filing a joint return. Even couples who don't want to be together might find it worth some valuable tax benefits to tough it out a bit longer to use this filing status.

Similarly, if you're single on Dec. 31, even if you were legally married the other 364 days, you no longer can file a joint return. Familiarize yourself how your status change might affect your taxes and plan accordingly.

7. Understand the tax treatment of support payments.
Alimony generally counts as taxable income to the person receiving it and can be deducted by the person paying it.

Child support, however, is not taxable, either to the spouse receiving it or the children for whom it is supposed to be spent. And child support payments can't be deducted by the paying parent.

The different tax treatment of these common divorce-related payments could have a major impact on your tax life and should be taken into account in structuring your divorce agreement.

8. Write off some divorce costs.
You generally cannot deduct legal fees and court costs incurred in connection with your divorce. DivorceNet.com notes, however, that you may be able to deduct fees paid to appraisers, actuaries, and accountants for services in determining your correct tax or in helping to get alimony.

You can read about more tax and general financial financial considerations in Dealing with Divorce Dollars and Cents, as well as in IRS Publication 504, Divorced or Separated Individuals.

I recently came across your blog and have been reading along. I thought I would leave my first comment. I don't know what to say except that I have enjoyed. Really a nice post here!

The most obvious impact on taxes, how to lodge a tax return is filed. Married status contract normally provides one of the greatest tax advantages. You can send this status until the divorce is final.

Great post. These tax concerns are too often overlooked when fighting over seemingly more important things like children and the estate.

This advice comes at the perfect time when I was asking myself this very question. It all comes down to common sense really, your blog is really nice and works as an adviser.

i feel sorry for the kids they are going too suffer the most.i wonder if they ever tried marriage concoling i love watching the show i wih nothing but the best for the kids