I grew up in a small, off the beaten track West Texas town. That meant that just about everything that made it into our local stores got to town via truck.

With the creation of the interstate highway system in the '50s, trucking got a boost. But even without that spider web of bigger roadways, in blue in the image below (which you can click here to see in a larger, and clearer, size, and then enlarge even more once the PDF opens), truckers found their ways to the wilds of West Texas and other harder to reach communities. 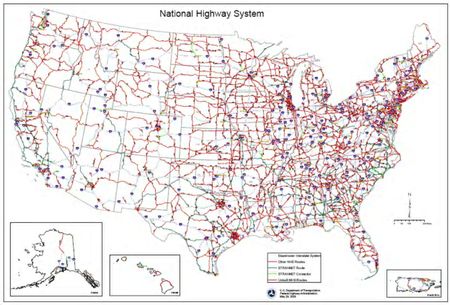 Those haulers are still trucking stuff to Kermit and other places connected by the country's national highway system of 160,000 or so miles of road. Nowadays, though, the trucking industry, like just about every other business, is taking an economic hit.

And if some Midwestern-based truck drivers were clients of one Iowa bookkeeping and tax service company, the news got a bit worse this month.

The allegedly too-low tax bills were arrived at, according to the federal complaint, by claiming improper deductions for the business use of the home and for non-deductible personal expenses.

The court paperwork also noted that the IRS examined approximately 243 returns prepared by Lemmon and in 224 cases found understated tax liability. Prosecutors say the tax losses from these allegedly false filings made between 2003 and 2008 could be as much as $17 million.

And, since you're by now wondering what this has to do with trucking, the Justice Department filing says that "Lemmon’s customers are primarily truck drivers, wage-earners, and small business owners who rely on Lemmon’s purported expertise on income tax matters."

Preparer and client woes: Joe Kristan at Roth & Company's Tax Update Blog notes that while Lemmon currently faces only a "preliminary" injunction, it has to be a terrible blow to her practice, as it is unlikely that she would be able to get the injunction lifted in time for next tax season.

It's also a blow to her clients who now are learning they owe Uncle Sam more than they thought. Some may have worked with Lemmon to allegedly lower their tax bills improperly. But others might have just taken her word for it that the write-offs were OK.

It doesn't matter to the IRS who came up with the questionable claims. When you sign your 1040, regardless of who fills it out, you are legally responsible for what's on the return ... and any consequences down the road.

So pick your tax preparer carefully.

Or, as the Court noted, "Deductions are a matter of legislative grace, and taxpayers bear the burden of proving their entitlement to a deduction."

Under such "grace," in Elsayed, TC Summ. Op. 2009-81, Hatem Elsayed saw some of his previously claimed expenses disallowed.

Special Trial Judge Stanley J. Goldberg did, however, allow Elsayed to use a higher per diem for meals and incidental expenses than the standard rate.

In 2009, transportation industry employees, as well as those self-employed in that sector, can claim $52 a day for meals and incidentals, rather than the regular $39 per day rate. The same goes for folks who transport people or goods by plane, bus, ship or train.

Racing down the road: It's early in a new month and Sunday. That can only mean it's time for a NASCAR race and the latest installment of my Crazy Woman Driver motorsports column, or Views from the Grandstands in its more "proper" incarnation.

The NASCAR guys crank it up this afternoon in Pocono. Although Hendrick Motorsports (HMS) driver and four-time series champ Jeff Gordon dropped back to second after a tough Dover outing, he's still in good position for both today's race and the chase for the crap this year's championship.

Gordon was the man who brought Rick Hendrick his first NASCAR championship. And part of the reason for Gordon's and HMS' continued success is the multicar concept.

In the June issue of Truckers News, I look at Hendrick and his key role in perfecting the multicar team  approach. By doing so, he forever changed the sport.

Check out my analysis and let me know if you agree with what I see as the good and the bad of the consolidation of ownership in America's premier auto racing series.